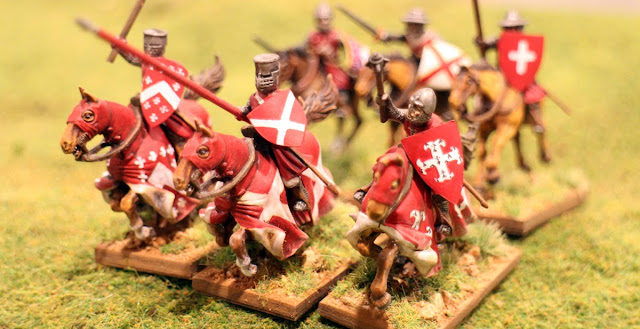 When I started the Analogue Painting Challenge, I had written off some Fireforge Mounted knights stashed towards the bottom of my lead pile. I vacillated on which heraldry to use and was intimidated by trying to hand paint teeny tiny crosses and birds in 28mm. I figured they'd be too tough to deal with during the speed painting of the competition. After painting up my medieval foot though, I was hooked. I took the "challenge" portion of the painting contest to heart and decided to tackle some medieval knights.

When looking for a period to run Lion Rampant I settled on the reign of Edward I. He was mixed up in internal strife with the 2nd Baron's War, a brief stint on crusade and clashes in Wales and Scotland, providing lots of variety from which to pull scenarios. I collected heraldry from knights in his service, cross referenced them against the number of conflicts they engaged in and picked half a dozen knights and earls who appeared in multiple battles so I could paint a figure once and use it in scenarios throughout the later half of the 13th century.

Then I realized nobody I play against will care, so just got started on painting and didn't sweat the details. So here are my guys!

First up is Antony Bek, the Bishop of Durham. I know it's pretty common among medieval fantasy games (hence the bludgeoning weapon I gave Tony), but I'm fascinated by the idea of a holy man going to war. Antony served Edward on crusade and in his Scottish wars. I gave Antony an attendant with simple cross heraldry (painting that curley cross with ermine pattern was enough the one time).

Next up is Thomas de Berkeley, a grizzled veteran of numerous battles. He fought at Evesham, Falkirk, the siege of Caerlaverock, and Bannockburn. His son Maurice (indicated with the extra blue label on his shield) also served in the Scottish wars, and later served Edward II. Those teeny tiny crosses? Such a pain. 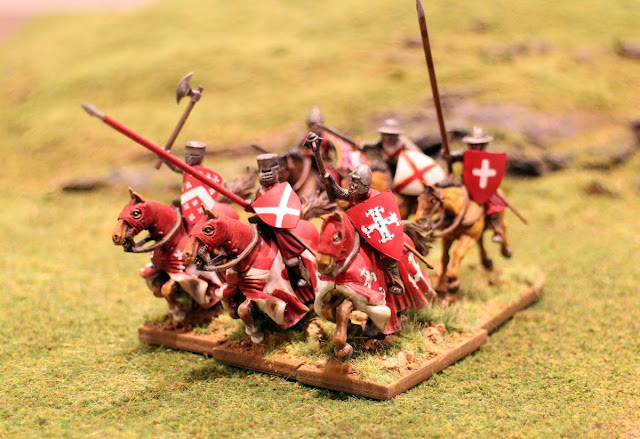 Six mounted knights completed. Painting (and repainting) the heraldry took longer than expected, but I'm happy with how they turned out and I'm looking forward to finishing up the next six mounted figures from the boxed set. I'm still getting my bearing with the period, so if you have any tips or info to help correct any mistakes (either painting or history) I'd be happy for the advice!