Another Batch of Fireforge Medieval Knights

The Analogue Hobbies Painting Challenge is swiftly approaching its deadline, and I'm trying to cram a few more figures in to boost my point total (gotta set a bar to hurdle next year!)

I finished up another set of Fireforge Medieval Knights, this time painted in largely yellow heraldry. Most of these are knights who served in the Scottish Wars, so I've cribbed a few helmets from a set of Teutonic Knights (snipping off some of the more fanciful horns) to represent gear from the latter half of the 13th century.

I selected what I hoped were easier heraldic devices to paint. Little did I realize that "straight lines" are pretty tricky to pull off.


This is the leader of our merry band, Gilbert de Clare, the Earl of Gloucester. Gilbert de Clare "the Red" (so named for his red hair) fought in the 2nd Baron's War and pledged service to Edward I on crusade. His son (also named Gilbert, and conveniently bearing the same heraldry) also fought in the Scottish Wars. Here he is joined by Thomas de Clare, bearing a banner bearing the de Clare arms.


Next up is Sir Robert Mauley and Piers Mauley, veterans of the Scottish Wars. Yellow with a black stripe was fairly simple to pull off, but the tiny birds decorating that stripe were pretty fiddly. Props to those who can pull those off!

Finally a pair of knights, Robert de Vere and John (or William, they used identical arms) de Vescy. I put off de Vere until last, hesitant to paint the star that adorns his arms. I even tried to find a decal I could borrow from a 15mm WWII Sherman, but without luck. I finally bit the bullet and attempted those daunting stars only to find they were dead simple. Easy! I was worried for nuthin'.

That completes this set of "yellow knights", ready for some skirmish battles. 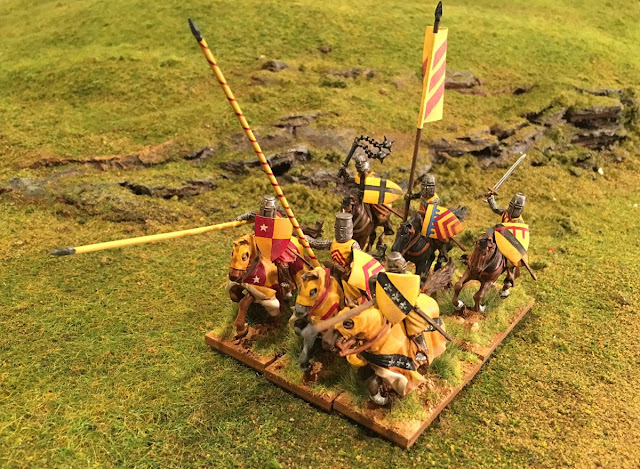 And also fills out a complete 12 base cavalry unit for mass battles. 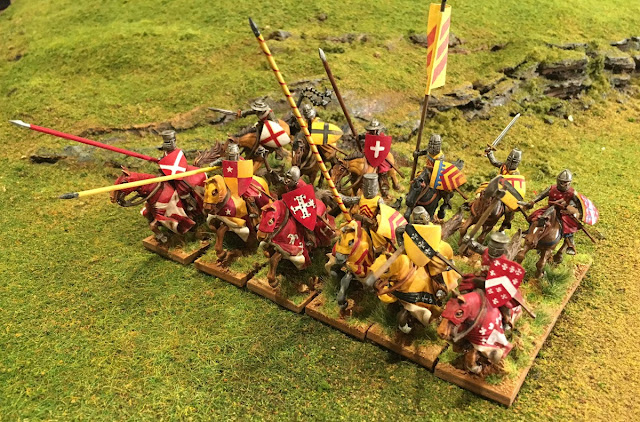 That should give me another 60 points. Here's hoping I can squeeze in a few more before the deadline to hit 500!
Posted by John at 9:39 PM