Right! For the Armour Theme I knew I wanted to tackle a painting challenge that I'd been putting off for nearly 20 years. I'd always dabbled with Warhammer 40K, but the increasingly grim and humorless turn the game took after Rogue Trader always rubbed me the wrong way. Even in the mid 90's I had an idea to put together a custom chapter to fit in with Games Workshop's Space Wolves and Space Sharks (since renamed to Chapter Charcaradon). A brotherhood of power armored space marines fashioned in the image of the greatest late night talk show host of the mid nineties: Space Ghost. 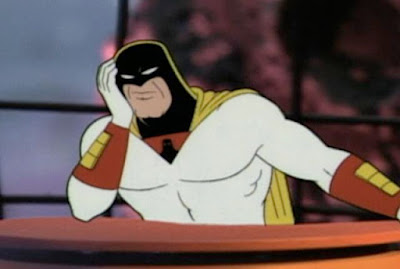 I'll admit, it's not a great idea. My college roommates and I used to watch Space Ghost religiously, but the show's been off the air for over a decade. And yet, this dumb idea won't leave me alone. Whenever I read a blog post about Oldhammer games, or flip through the latest edition of Warhammer 40K in the game shop, a tiny voice whispers to me, "You should paint some Space Ghosts." Therefore my fellow painters, to exorcise myself of this nagging idea please humor me while I get this out of my system.

I based the paint scheme on the classic Space Ghost uniform, but since I'll likely be putting these on the table against my 8 year old son and he has no idea who or what Space Ghost is, I've tweaked the color scheme a bit closer to something he'll recognizes: Imperial Stormtroopers from Star Wars. 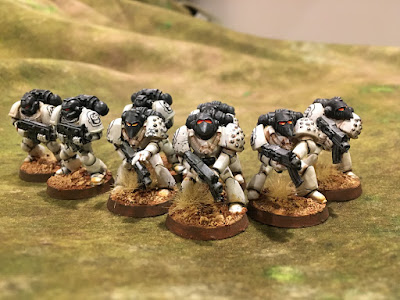 I'm retaining the overall white scheme and black mask/helmet, but only veterans get the red wrist bands. Space Ghost's flashy yellow cape will be reserved for the chapter master himself. 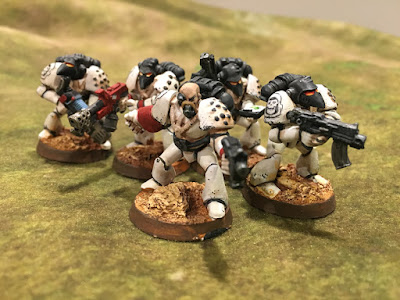 The Space Ghost emblem wasn't really doing it for me as a chapter symbol, so I cooked up one of my own and printed them on decal paper. 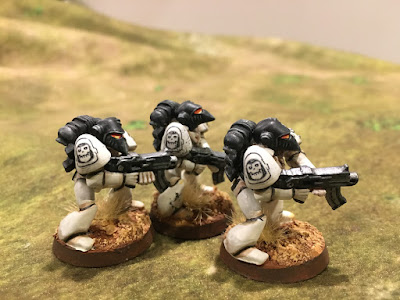 I tested the color scheme on three modern figures, but for the most part these are classic Rogue Trader beakie marines I've cobbled together from eBay collections, stripped, repaired and upgraded with current special weapons when they've been missing.

That's a total of 13 space marines for 65 points I believe. And hopefully just under the deadline... the paint is still wet on a few of these! 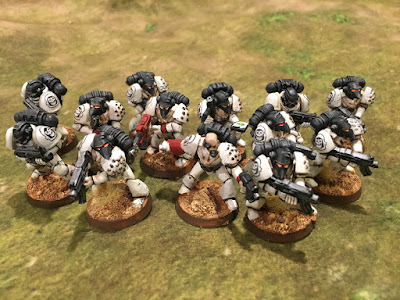