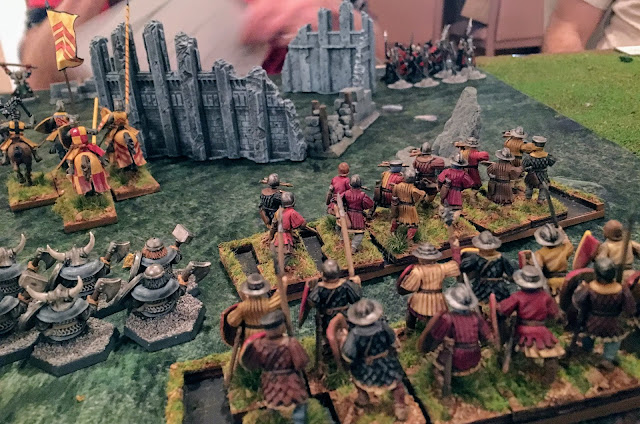 As my post Thanksgiving turkey coma subsided, I was able to roll my mashed potato filled carcass to my friend Joe's place for a four player Dragon Rampant bash. Join me after the jump for the details.

I hadn't played any flavor of Rampant for over a year, and we were limited to the collection of figures Joe and I had between us. Working within those restrictions I put together four army lists:

The two allied human forces set up facing their evil foes. The undead roused themselves from their deathly slumber in a ruined cathedral, while the goblinoids angled to take the high ground. 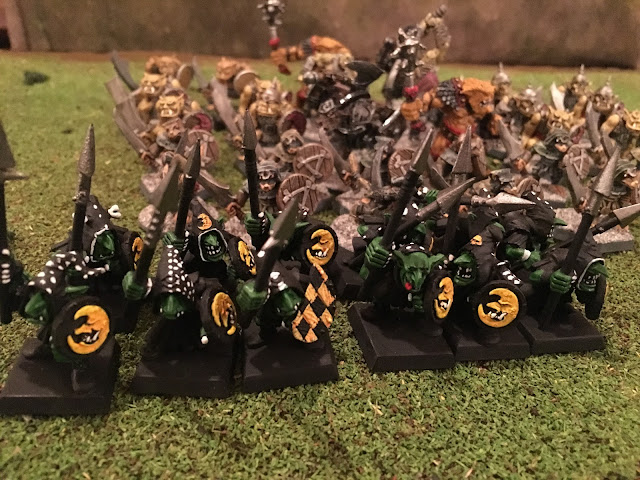 With responsibility of the right flank, my beardy wizard ordered his elven archers to take the high ground in the center of the field, while the enemy goblins did the same on the hill to their flank. 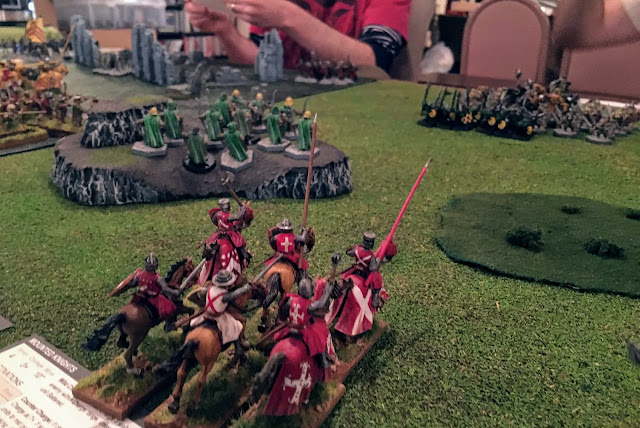 The men of the Iron Hills surged forward to meet the walking dead facing them. A furious battle ensued, with the center of the undead line pulverized by the charge of the royal prince and his heavy cavalry.

In my half of the battle, the two opposing missile troops rained arrows down on the foot troops who only reluctantly marched forward. 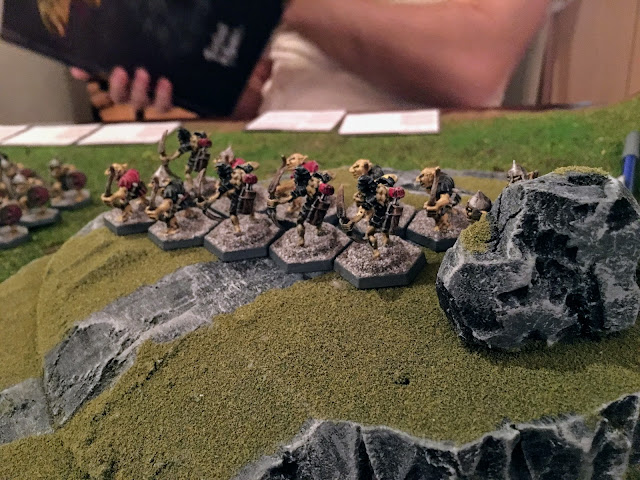 Finally my mounted knights were within charge range of the enemy horde and graced the battle with their show of force. 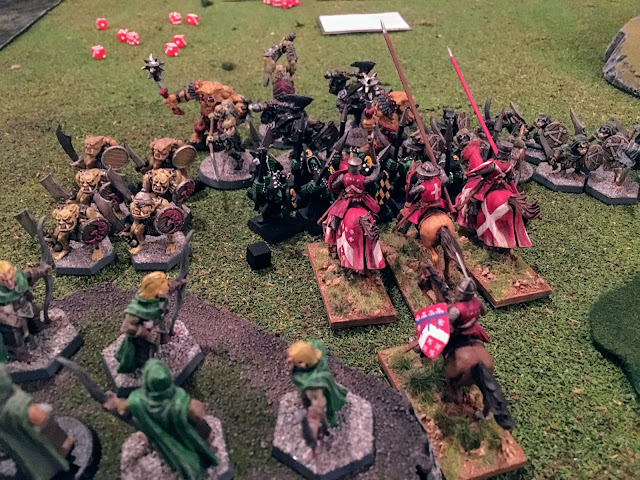 Encountering goblins with their arms set in a 'wall of spears', my knights were repeatedly thrown back, giving the heavy orc contingent room to clamber up the hill and assault my elves!

On my left flank the undead fell back and redressed their lines. The impetuous and invincible Prince continued charging enemy units, little heeding the losses he was taking. 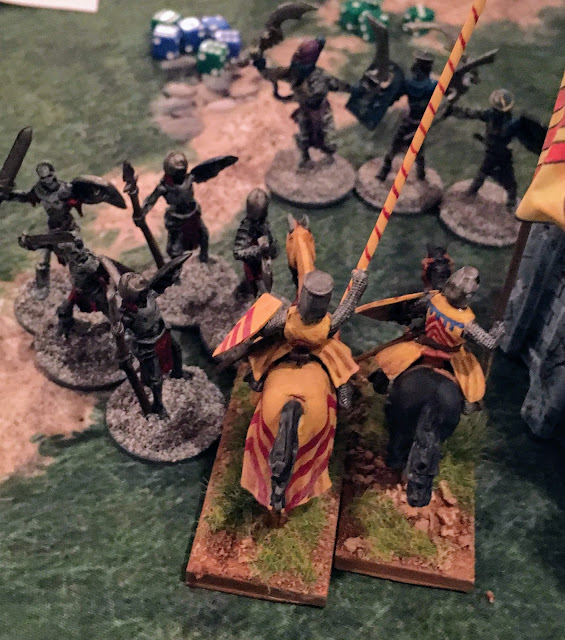 Finally realizing the peril he was in, the prince fell back and sent in his foot troops to deal with the remaining dead. 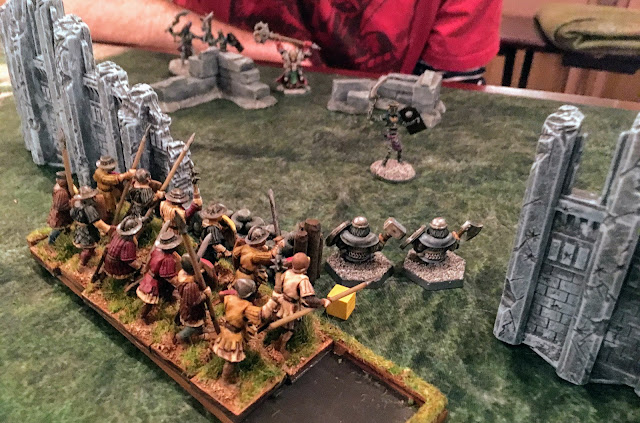 With our forces come to grips, the goblinoids and men ground each other down in a scrum that was a battle of attrition. The undead were decidedly crushed though and my ally's forces were able to turn and begin pressuring the goblinoids. Sounding their horns the goblins fled from battle, loping after their necromancer ally back to the black pits from whence they came. 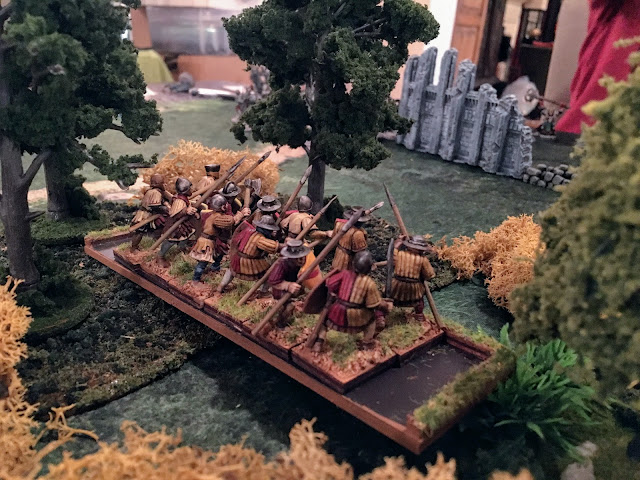 You can check out a report of our second battle of the night at my ally Joe's blog.

I was fairly rusty on the rules and this was a first game for our three other players, but we still managed a great game. I like the Rampant games because the rules are fairly straightforward, there's enough variety between units that they feel different, and you can wrap up games in a short time (when we finished this battle there was still time in the evening to eat dinner and play another game of Dragon Rampant).

There are a few details I wouldn't mind seeing addressed. The play aid in the back of the rule book is useful, but a more complete version plus an actual index would be ideal. While units can be customized, I'd like just a bit more variety to take into account the full breadth of options in fantasy units. Spellcasting also seems to be more of an afterthought. These are all pretty minor grumbles and my lack of experience may be exposing some misconceptions about the rules (you'll note that I dispensed with the "3 inch zone of control" for friendly units among others). Currently Dragon Rampant is my favorite of the fantasy games I have on hand but I'm looking forward to Oathmark and would happily give another set a try.
Posted by John at 10:43 AM