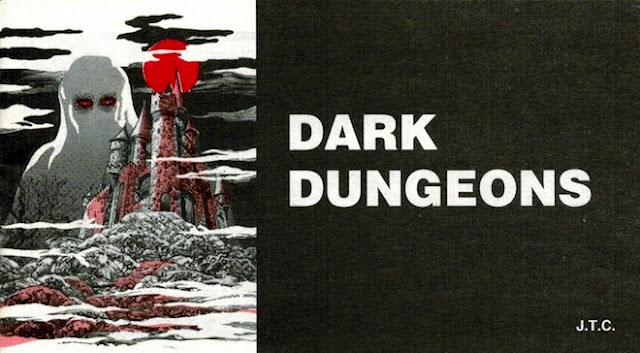 I've been gaming for a long time. While I stick primarily to wargaming these days, I cut my teeth in the early eighties with Dungeons & Dragons, the grandaddy of fantasy gaming. Today fantasy RPGs are going through a bit of a renaissance, and while not entirely mainstream they've become an accepted, if somewhat geeky hobby.

The early days of D&D were a bit different as American mainstream culture didn't seem to know what to make of tabletop role playing. Always a niche pursuit, the game's growing popularity drew increased attention which grew from disinterest and dismissal into an increasingly bizarre and panicked fervor. Beyond shunning and ignoring a fringe subculture the mainstream didn't understand, the rising "Satanic Panic" that gripped adults who feared their children were being lured to eternal damnation by strange, many-sided dice lead to a number of shrill screeds against the game that was "corrupting the youth of America."

Surely you've seen this, right? During the early 80's, Jack Chick (evangelical cartoonist and annoying busy body) produced rafts of misguided comic book pamphlets to save the souls of anyone who failed to adhere to his particular interpretation of the Bible. Naturally, a game in which players could learn honest-to-God spells like "Otto's Irresistible Dance" had to be thwarted at all costs.


Look at the size of those miniatures! Those have to be 54mm at least, unless the party is facing a clan of Hill Giants or something. Also, Debbie in the pigtails is pretty cocky. She casts "Light" and declares the monster blinded? Uh, hello Debbie, I'm pretty sure the DM needs to roll a save first.


This is my favorite bit. It's stuck with me ever since I encountered it decades ago. First off, "Black Leaf" is a great name. So evocative, so old school! I honestly love it. Second, Black Leaf's player Marcie's reaction. So great! So over the top! Look at the speed lines coming out of her head, she must be totally wigging out, whipping her head back and forth in disbelief. "Guys!" she must be silently pleading with her eyes, "Delay Poison spell? Anybody?"

Debbie the magic user has had enough of Marcie's fits. I'm guessing "Black Leaf" is the just the latest in a long line of Marcie's dead PCs, each accompanied by one of her overreactions. Debbie has had ENOUGH. It's the only explanation, otherwise the other five members of the party could probably pool their cash and get Black Leaf raised.

I've lost my fair share of player characters, and even more tabletop wargaming units, heroes, spaceships, and minions. Inevitably while I'm moving the fallen figure off the tabletop to it's resting place within a foam storage carrier a tiny voice in the back of my head mourns for it sarcastically, "Black Leaf, no!" 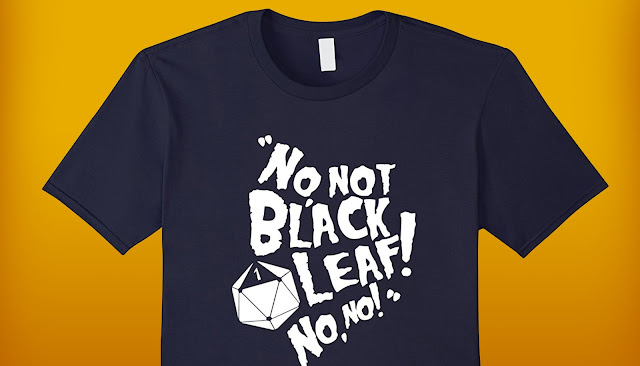 I got a kick out of putting together my Undead Astronaut shirt recently, so I've spun up another commemorating the untimely demise of one of tabletop gaming's fallen heroes:

These will be available on Amazon for a few months if you'd like to join me in a memorial to poor tabletop sportsmanship. And just in time for the holidays!
Posted by John at 10:03 AM