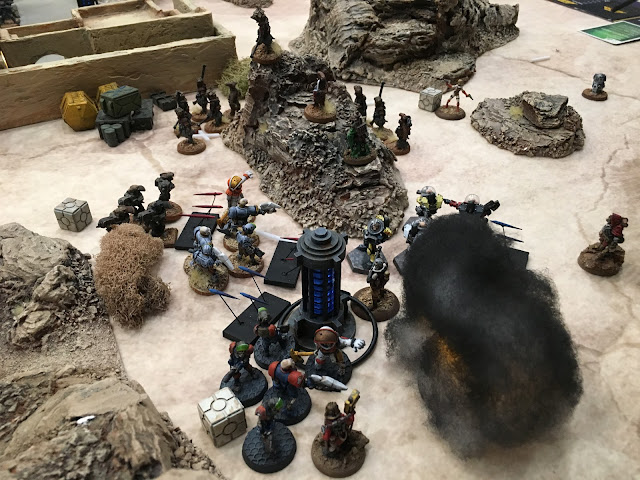 I've run this scenario many times over the last few months, tweaking both the rules as well as the scenario itself to provide a balanced game that would give players plenty to do. It's essentially a zombie attack, one side playing the ravening hordes of undead and their alien masters, with the good guys trying to hold off the creeps long enough to evacuate innocent civilians and heroes on the last shuttle. In play testing, the horde of shambling dead won consistently, and while the good guys eked out a narrow victory in the final play test before the convention I was by no means sure those balanced results would play out with players who were completely unfamiliar with the rules.

The first play through on Friday saw the good guys take an early lead by capturing objectives to send an evacuation signal to the populace, but the march of the undead was inevitable.


Star Schlock has a learning curve which I've done my best to smooth out. Once Brett and Nicholas, the father / son team who ran the rotting legion had grokked the rules, they really started putting the hurt on the evacuation rear guard. There are multiple small subsystems of rules in Star Schlock. After playing for a few rounds players typically start to see how they interact and can chain together various abilities and resources into devastating attacks. The cheer that erupted from Brett and Nicholas when they unleashed the full fury of their alien Elder Thing which ravaged some enemy infantry warmed my amateur game designer heart. 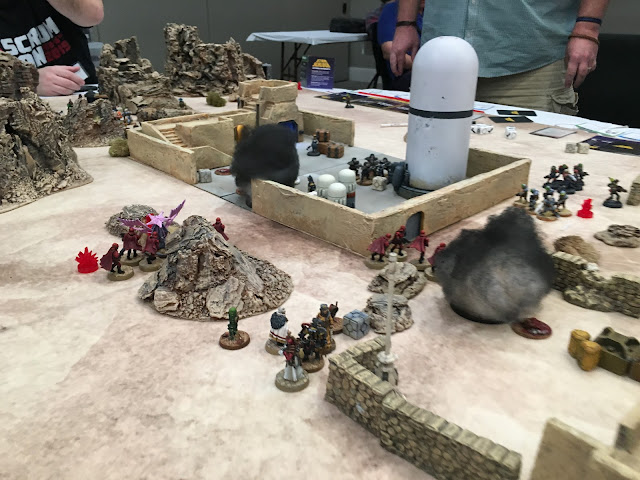 The game wrapped up well before my three hour time limit, with a narrow victory for the undead (9 victory points to the good guy's 7). This game also featured lots of the elements I wanted to encourage with the rules: fires broke out from stray laser bolts, units swept across wide portions of the battlefield, and players were forced to make difficult decisions throughout the game. Overall, I believe most of the players enjoyed themselves.

The following day I was scheduled to run the same Star Schlock scenario again. I tweaked the board layout slightly by removing one piece of terrain from the "canyon" area to give the defenders longer sight lines to employ more ranged attacks.

The good guys were able to take an early lead, claiming multiple objective pylons with scouts, getting civilian bystanders to the escape shuttle and capturing the key 'Pumping Station' objective to fuel the shuttle. The dead horde was hard pressed to keep up, but in the final round their melee focused troops finally contacted the defensive line, absolutely obliterating several units.

After totalling victory points, the score was tied, a first in all my play tests of Star Schlock! (but clearly something I should have foreseen).  This game played out quite differently from the previous one, featuring lots of panicking civilians but no raging fires, a more cohesive defense strategy by the good guys, but still a very close game that came down to the wire.

Before cleaning up the table Joe and I decided to run an 'off the book' game to get one more play through in. He managed to shanghai a few guys he'd played with in earlier games who agreed to give Star Schlock a try. Joe and Thomas ran the good guys, while I helped Jay and Ryan (Brian?) run the undead horde.

This game played out completely differently from any previous play test. Joe, being an experienced player, was able to prevent the undead from securing any objectives. Thomas was able to utilize his units really well, getting his snipers into position on cliffs where they could concentrate fire and knock out undead units with impunity.

The center of the board, usually ignored in most play throughs, became a meat grinder, as undead poured through, barely held back by heroic infantry.

In a final gamble, Jay was able to run the Elder Thing halfway across the board, clamber it over a ten foot wall and slaughter the last guardians between it and the escape shuttle.

It was all for naught though. Joe and Thomas had wisely loaded the shuttle with evacuees and it blasted off, giving the good guys an incredible 9 to 2 victory point blow out.

A great final session to end the convention for me. Across all three games I had every possible outcome: one win for the undead, one for the good guys and a tie. I think I lucked into creating a pretty balanced scenario!

I learned a ton from running these games, and I'm very thankful for the players who joined me and had the patience to learn a new system that has its own quirks.

If you are interested in hearing news about Star Schlock as I continue developing it, you can sign up for updates on starschlock.com. If you live in the DC area and would like to give the game a try, I'll be running another session of it at Scrum Con on February 29, 2020.

Until the next mission Space Rangers, keep your blaster handy and your warp drive hot.