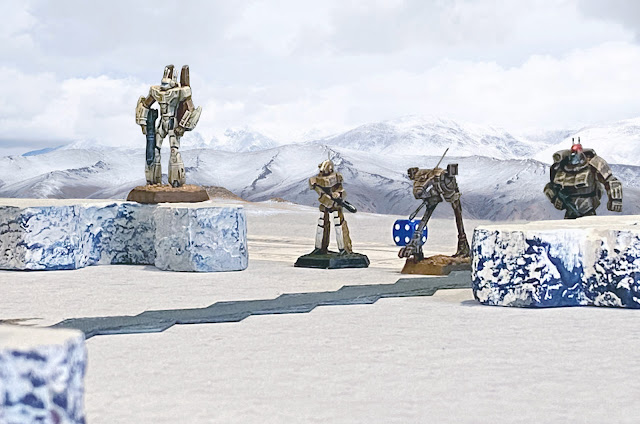 
Our campaign is set in 3002, late in the Third Succession War when life is cheap but battlemechs are expensive. I think mech and prisoner exchanges would probably be the rule of the day to preserve the ancient battle machines since factories that can produce them are rare. I added in the option of ransoming or exchanging captured pilots and mechs as a standard battlefield option.

My son agreed to the deal, anxious to get his captured Locust back, but wanted to know if any of the captured Lyran pilots were willing to defect to his mercenary unit instead. I decided to let him roll a d6 for each captive and on a 6 the captive would be eager to join his crew. Surprisingly, the random number generator decided the Commando's mechwarrior wanted to stay with his machine (muttering something about being under suspicion for unmentionable crimes by his superior officer) and agreed to join the mercenary band.

With prisoners and mechs exchanged, and still playing the part of pirate raiders, my son's mercs rested and repaired before launching another recon mission. To shake things up a bit I added a new recon mission type — Deep Recon — that I thought might benefit his light mechs who can't go toe to toe with the heavier battle machines House Steiner would inevitably field. 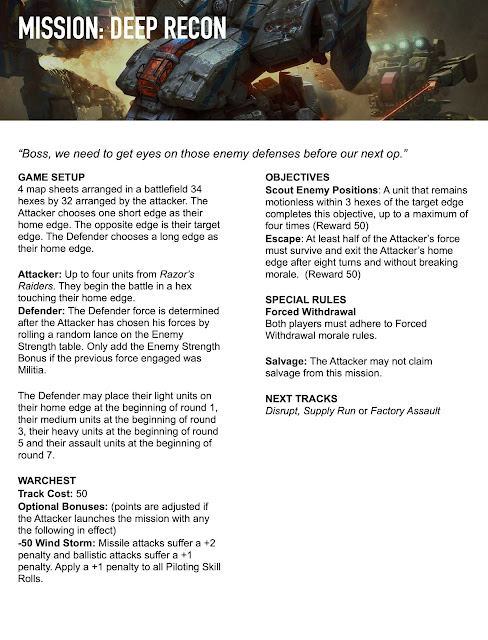 Using the cover of a windstorm, my son's mercenaries would simply need to get one or more mechs to the far side of the battlefield to observe distant enemy defense and then hustle at least 50% of his force off his home edge to safety. With many of his mechs still in need of repair he formed a new Recon Lance —the Locust, Stinger, a Griffin piloted by Cpl."Kiwi" and the Phoenix Hawk as a command mech. 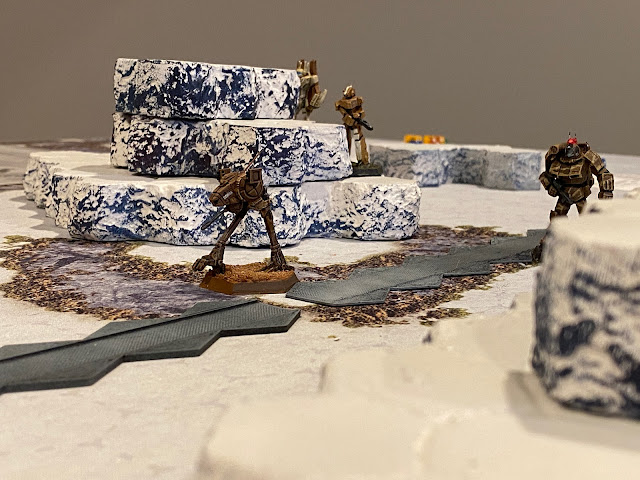 Descending from their mountain hideout, the mercs have been making forays deeper into the industrial heartland of Lyran occupation on the world. Following a road network, Sgt. Cooler opened up the throttle on her Locust as the flat expanse close to their objective opened before her.

Their approach had been detected though, and the Lyrans scrambled the nearest available unit to stop them. In these campaign games I roll my units randomly, and thus far had been plagued by low rolls resulting in fast but relatively weak mechs. This time I rolled a 10 on 2d6 granting me a poorly trained militia lance of heavy mechs. The slow speed of my forces meant the mercs had several rounds to approach the target zone unmolested. Ugh, how I wished I could have a few 25-ton Commandos at that moment!

When my lightest element, a Griffin, arrived he found the Locust nearing its objective with the mercenaries' trailing units approaching the center of the battlefield. 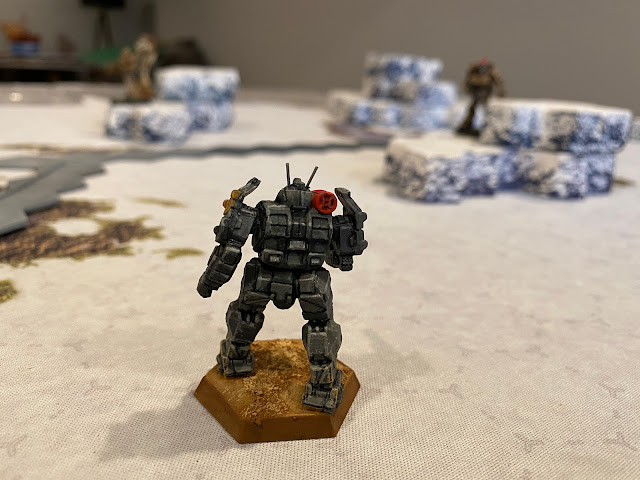 The mercenary's heavier mechs, the Phoenix Hawk and Griffin took up defensive positions on a low hill dominating the central plain, while the Stinger raced forward to catch up to the speedy Locust. 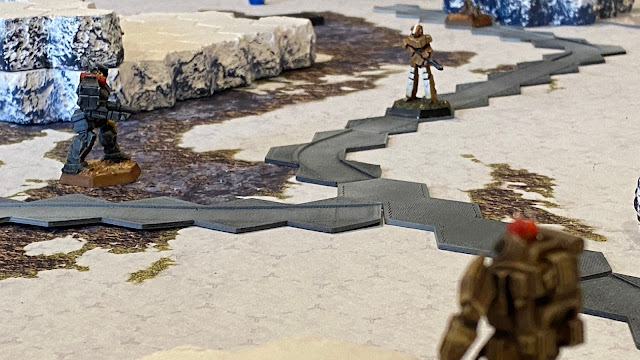 The Griffin fired an ineffective PPC bolt at the Stinger, but the canny mercs had used their speed, terrain and the high winds to make LRM fire impossible.

The Lyran Griffin used its speed and jump jets to close the distance to the intruders, hoping a lucky particle cannon hit might slow them down. A lone Griffin had no hopes of stopping the mercs, but the arrival of its lance mates offered a fleeting hope they'd be able to catch the intruders. 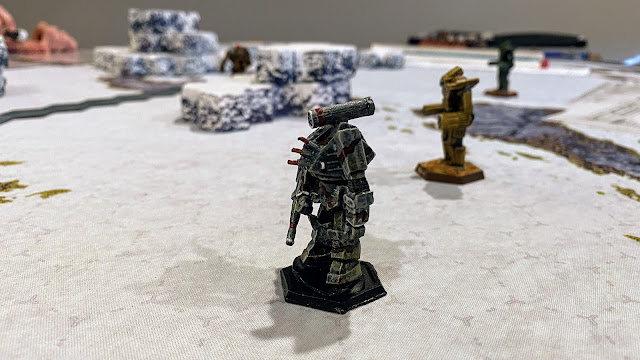 A 65-ton Thunderbolt and a pair of 70-ton Orions entered the battle at the beginning of round 5. While slow, I hoped to cut off the merc's escape and lay devastating fire on their lighter units.

Alarmed at the arrival of such heavy mechs, the mercs turned to face the intruders, taking cover in in the meager protection offered by a few low hills. 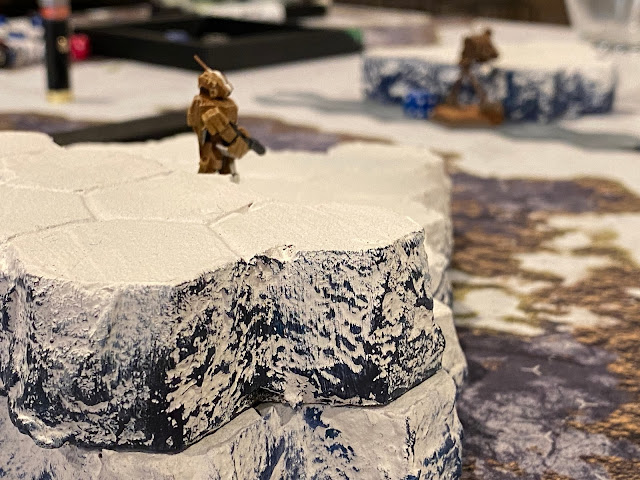 Knowing I would never be able to outmaneuver them, I sent my Lyrans out in a wide line, hoping their interlocking fields of fire would be able to catch the mercenaries like fish in a net. 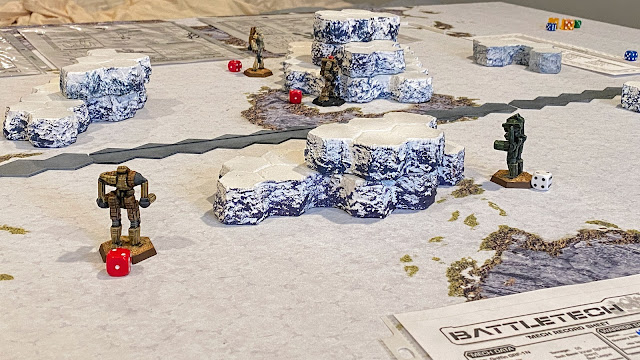 My Orions clomped forward to dominate the center and east end of the battlefield, to which the mercenaries responded by falling back. The Orions opened up with long range LRM and autocannon fire, but the howling winds of the icy plain were just strong enough to throw their shots wide. If only I had rolled up mechs with long range energy weapons!

To the east the Griffin and Thunderbolt began honing in on the merc recon mechs desperately trying to complete their long range binocular scan of the Lyran disposition to the far west. 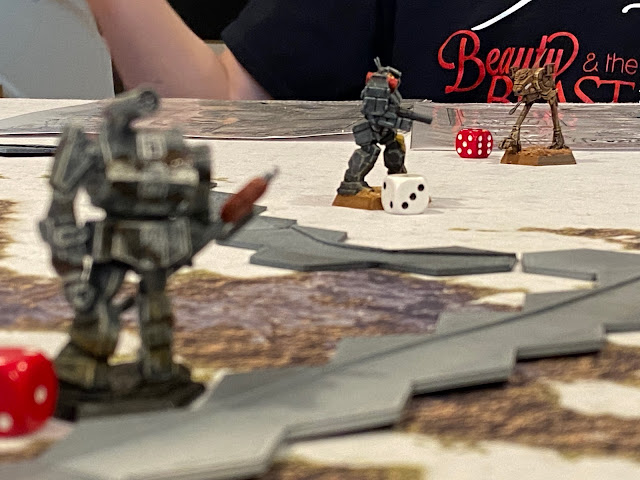 Sgt. Cooler, dodging bolts of blue plasma from the Griffin's PPC raced into cover with the Stinger. Time seem to march forward agonizingly slow, their onboard seismic sensors registering every footfall of the approaching Thunderbolt, but each second they held out gathered even more critical data that could merc lives in future missions. 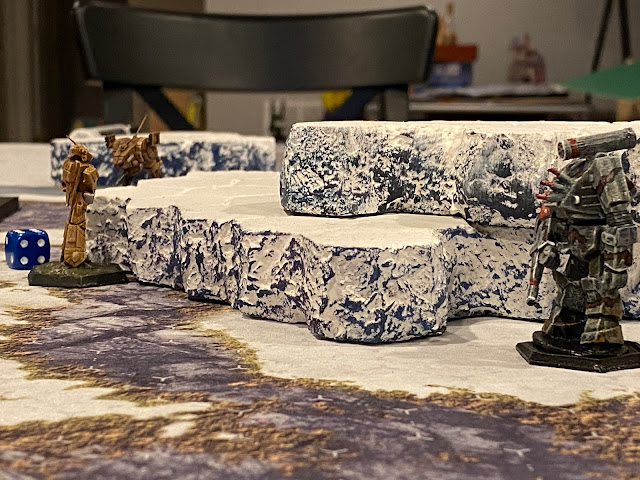 To the east, the Phoenix Hawk and Griffin continued to fall back. Having caught a few errant medium laser hits they knew they'd be outmatched in a slugfest with the heavy Orions. 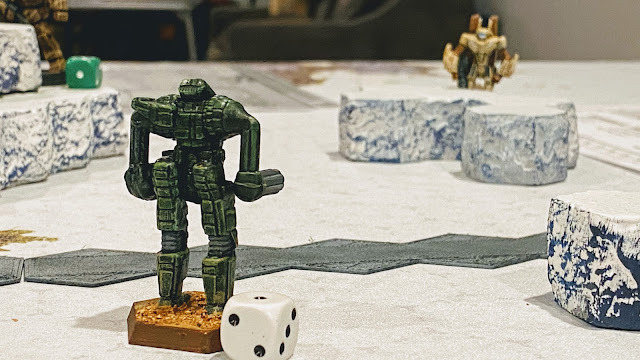 In constant coded communication with the Stinger and Locust on the far end of the battlefield, they'd be able to download the scans they completed and race them back to the mountain hideout. If they could only hold out long enough!

Spooked by the approach of the Thunderbolt, Sgt. Cooler made a break for it in her Locust. The Lyran Griffin had fallen back and taken a sniper's position atop a hill at the center of the battlefield,  forcing Cooler to race by it at close range. 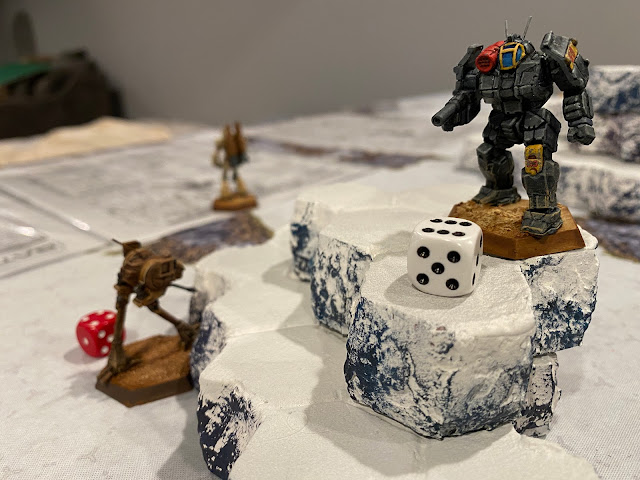 The Griffin tracked the speeding Locust, leading the target (difficult at such a close range) and squeezed off a PPC blast. The blue bolt tore through the scout mech's armor, blowing an arm off and burning a hole directly into the engine shielding at the core of the machine. Smoke billowed from the Locust as Sgt. Cooler wrestled with the controls to keep the machine pointed towards home.

Now left completely alone, the Stinger pilot managed to use his jump jets to dart into the only safe spot —directly behind his titanic opponent! 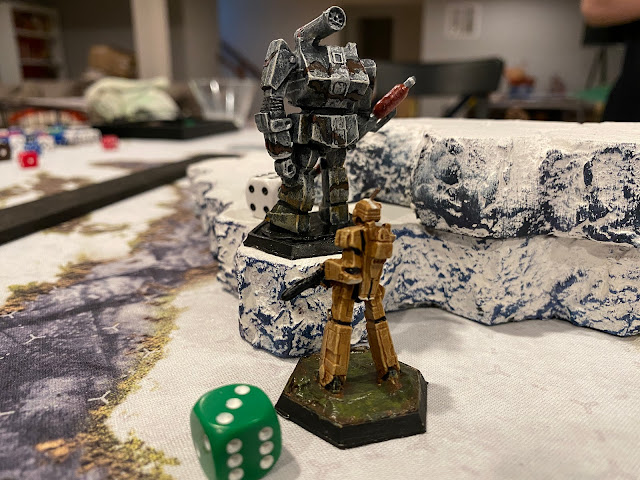 With the bulk of its weapons mounted in its torso, the Thunderbolt made a poor close combat brawler. Ignoring the sporadic machine gun fire that sprayed its rear torso armor it aimed its large laser at the wounded Locust but the beam swung wide, missing the crippled mech. 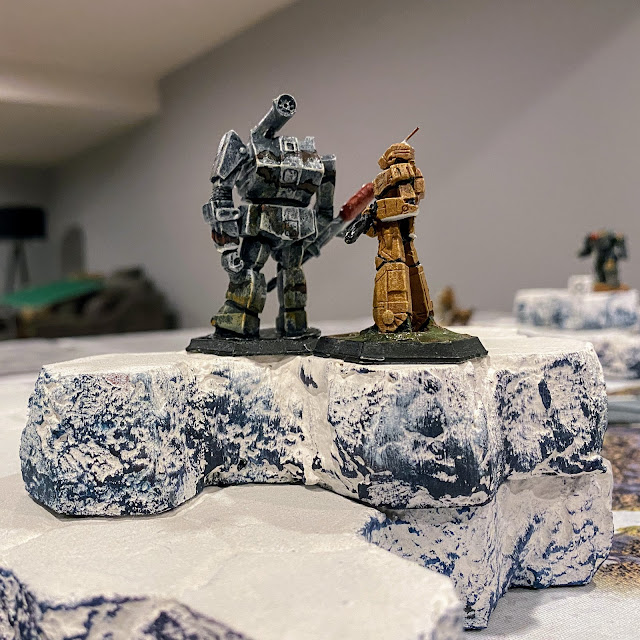 Hoping to get a clearer shot on the retreating Locust, the Thunderbolt climbed higher up the hill. Seeing the threat the battlemech's long range laser posed the Stinger pilot maneuvered into position just behind the heavy mech a second time.

"Going to spray me with machine guns again?" I scoffed.

"Nope. I need my arms for a physical attack."

Ah, poor boy. Even a few punches wouldn't penetrate the Thunderbolt's rear armor. My Thunderbolt snapped off a few long range attacks at the Locust, but to no avail. With shooting complete I fetched the punch location chart for the Stinger's attack.

Alarm bells sounded within the Thunderbolt's cockpit as gyros strained to keep the mech upright. Astonished, the T-bolt pilot flicked through the external camera feeds before finding the miniature Stinger pushing the Thunderbolt with all its might. Stone and snow cascaded down the steep slow beneath the heavy mech's foot as it struggled to find purchase. With a groan of steel and the whine of flexing myomer muscles the 65-ton behemoth toppled over head first before crashing into the ground two stories below it. 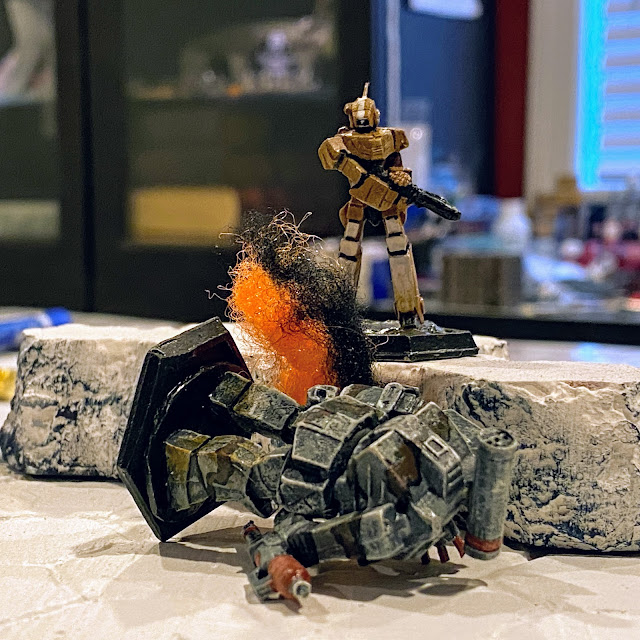 Satisfied the Thunderbolt wouldn't be able to keep up now, the victorious Stinger jumped away to the south, the Locust veering off to the north while the Phoenix Hawk and Griffin exited the battle to the east. Like birds scattering from a hunting hawk, the mercenaries split up and returned to base, custodians of the precious reconnaissance info for their next attack, another victory marked in their combat record.

This was a bit of an odd game for us. The recon mechs did what they were supposed to do, the high winds definitely saved their bacon several times, and my Lyran heavies were just too slow and poorly equipped for the weather to do much about it. I assume clashes like this with only sporadic fire would be typical of the battlefields of the Inner Sphere, but with few opportunities to mark off tiny little armor bubbles on our record sheets, this was an unsatisfying game that left us wanting more. I think tweaking the mission parameters to force all mechs off their home edge (rather than just 50%) might encourage more close range fighting, but that's the type of thing a playtest like this is supposed to find. In any case, we wrapped up the game quickly and the mercs got another victory under their belts.