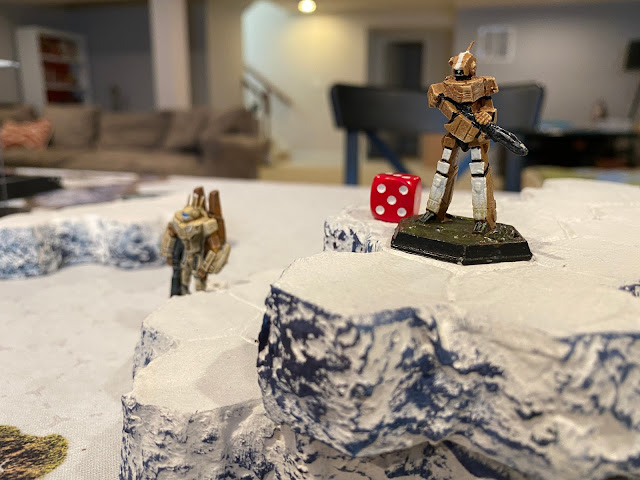 Following a narrow roadway that descended from their mountain hideout, the recon lance needed to probe enemy defenses, scanning all they encountered at short range in order to deliver the telemetry back to base. Using the cover of darkness, the Raiders relied on instruments to navigate the cover of the boulder strewn pass.

Lyran seismic detectors alerted House Steiner forces and the nearest lance was deployed to halt the mercenary incursion. Commanded by a lieutenant in a hastily repaired Thunderbolt, the heavy mechs of the planetary garrison trudged along the snow covered service road to meet their attackers. 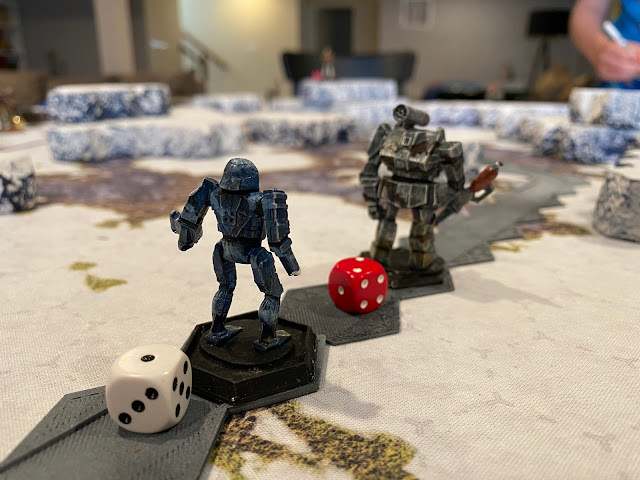 Having previously encountered Razor's Raiders the Lyran lieutenant was eager to settle the score after his earlier defeat. Backed up by a 50 ton Trebuchet, the lieutenant deployed the two mechs behind cover in a more open area of the pass with good lines of sight to await the inevitable onslaught. 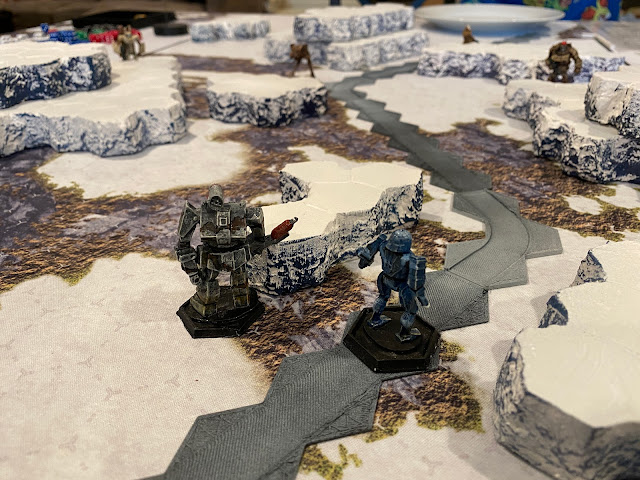 Using the cover of night and their great speed, Razor's Raiders dashed from one rocky outcrop to another. Unable to get a strong target lock or even a shot over iron sights in the darkness the Lyrans ground their teeth in frustration. 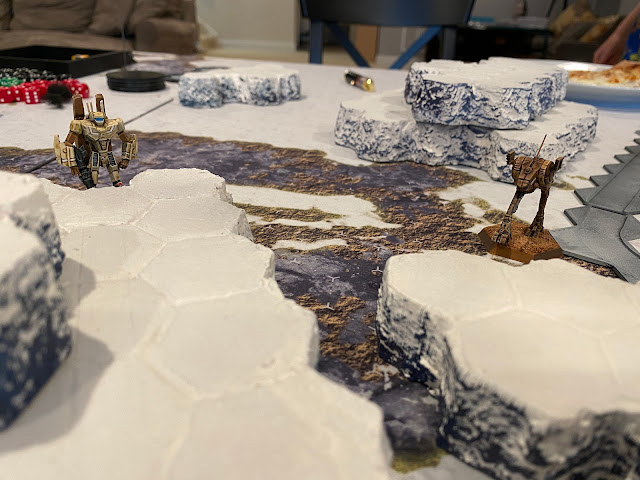 Despite the protection of the terrain and poor lighting, the recon team was hesitant to approach.

"Home Base, this is Recon One. Looks like we've stumbled into some stiff opposition here," Sgt. Maple reported over the lance comms channel from atop her Phoenix Hawk. "It's going to be tricky."

"Sergeant, I've got an idea," offered Sgt. Cooler as her Locust dashed into cover behind a low rise. "That old Star League training vid I was telling you about. I finally got a magnetic tape reader running and was able to view it while they were pulling my Locust's gyro last week."

"Aw, c'mon  Cooler, can it with that old junk," came Kiwi's admonition over her Griffin's comm channel. "Just face it, you got rolled by that junk dealer. Aint no way he pulled it from a genuine Star League base." 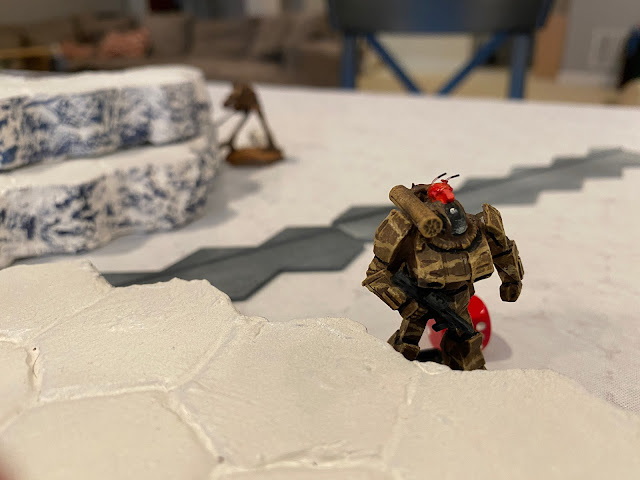 "Negative Hoover, it was legit. There was a lot of magnetic corruption, but I could make out enough to see it was real. It was titled 'Going Prone and You', a training documentary by the Star League hero Troy McClure."

While the recon lance jockeyed for position among the rocks at the north end of the canyon a pair of additional Lyran mechs stomped in from the south. 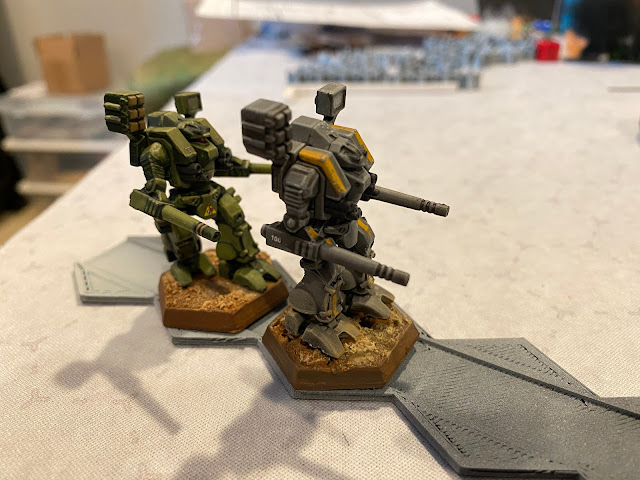 70 tons each, the heavy House Steiner Warhammers sported a pair of long range PPCs, a dreadful array of short range weaponry and most distressingly, high powered searchlights mounted on their left shoulders.

The two mechs rolled out into a deep defensive line to cover the advance of their Lyran comrades. With an electric thrum both of the heavy mech's searchlights snapped on, flooding the canyon with light. 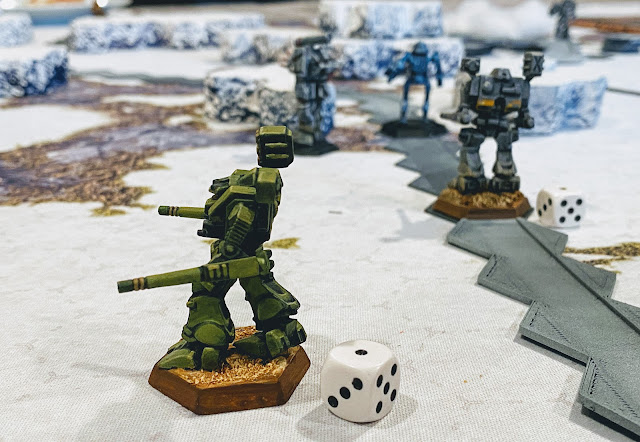 "Alright, can the chatter team," Sgt. Maple directed. "We need to get on those mechs before they have a chance to fully deploy. Kiwi, Hoover, you lay down harassing fire. Cooler, let's get in there to scan." 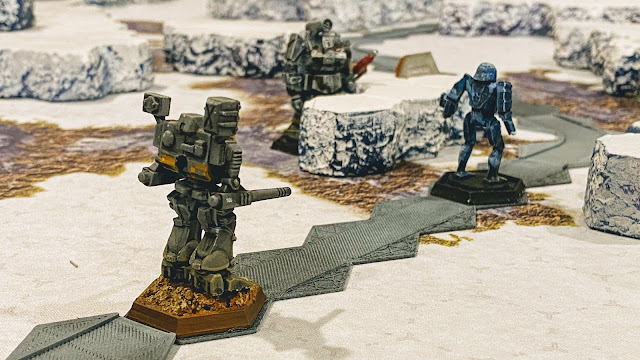 Sighting the most likely spot for a confrontation, the garrison Thunderbolt eased into a hollow that offered protection on three sides. The Trebuchet and Warhammer maneuvered to provide long range support as the mercenaries began their approach.

Sgt. Cooler throttled her Locust up to nearly 120 kph headed straight towards the Thunderbolt that tripled her mech's weight. The Thunderbolt swiveled at the hips to meet the Locust's charge, but at the last moment the light mech dropped, sliding behind the rocky outcrop like a runner stealing third base. 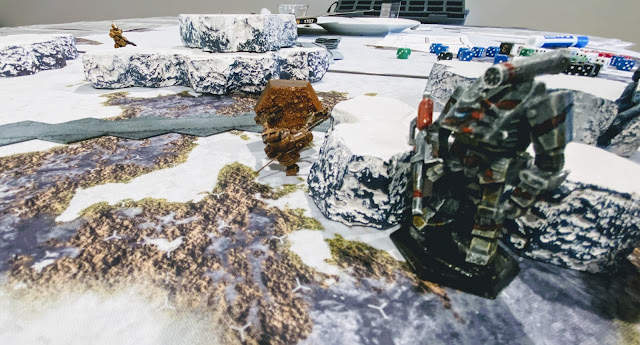 Rather than an easy shot at short range over partial cover, the Locust was now completely obscured and the Thunderbolt was left without a target. Despite the obscured line of sight the Locust's short range sensors worked just find and read the enemy mech's navigation telemetry just fine.

With one recon scan complete, Sgt. Maple jumped her Phoenix Hawk into position behind a high ridge. A Lyran Warhammer on the west flank turned and hurled two charged particle bolts at the mercenary, blasting armor from its leg and torso. 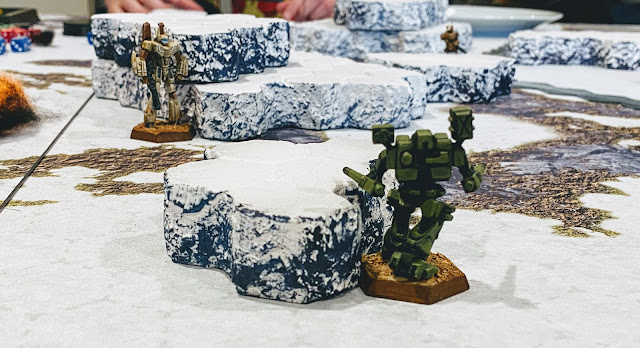 With the House Steiner mechs swatting at the mercs along the west, Cpl. Kiwi lifted off on jump jets and settled into notch in the canyon wall completely obscured from the enemy.

Hoover's Stinger dashed into the open, using sensors to feed location data to Kiwi's hidden Griffin. With target coordinates locked, the Griffin fired a volley of long range missiles into the sky that arced in a tight parabola and came down directly on the Lyran Thunderbolt. 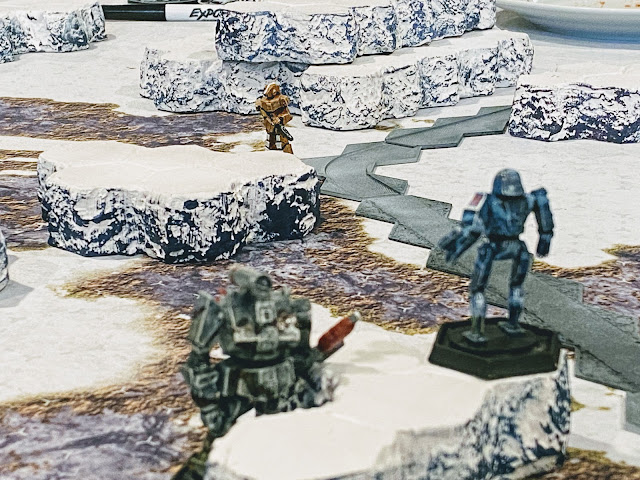 Taking a cue from Cooler, Sgt. Maple guided her Phoenix Hawk into close range of the Lyran Warhammer before diving to the ground behind a low hill. Dialing in her sensors Sgt. Maple picked up the vital navigation data from a second Lyran mech. 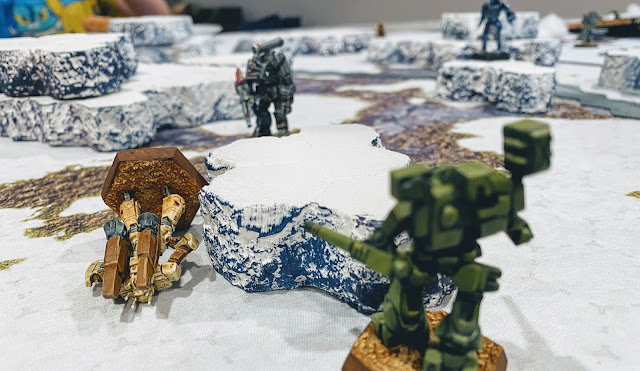 "No worries Maple, I've got this!" Cooler's Locust swung wide around the Lyran lines, pausing in the shadow of the second Warhammer's rear. The 70-ton titan swiveled, but unable to bring its torso mounted searchlight to bear the tiny mercenary recon mech was blind to the Warhammer's weapon sights. 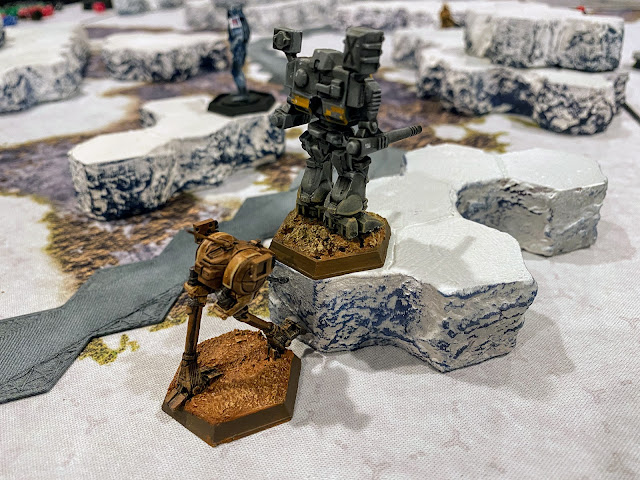 "Nice work Cooler. Nail that Trebuchet and let's clear out. Hoover and Kiwi, start falling back." The recon commander continued to issue orders to the lance as she prepared to get her mech to its feet when the garrison Thunderbolt rounded the rise and peppered the Phoenix Hawk with short range missiles 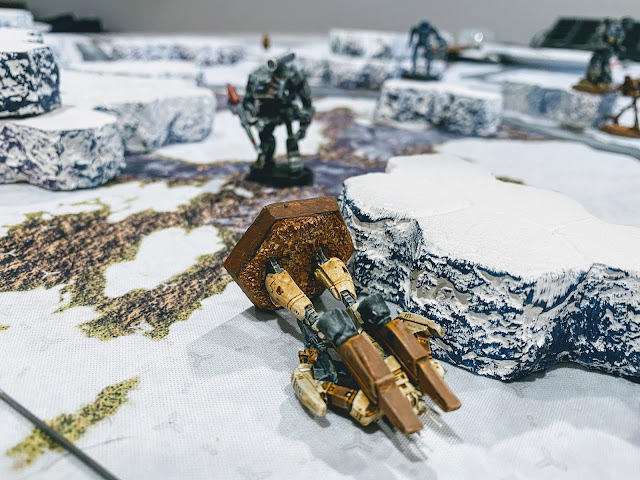 Easing her mech to its feet, Maple backpedaled towards the north firing a single large laser bolt at the Lyran Thunderbolt in the hopes of getting a lucky cockpit hit. The Steiner mech, focused on punishing the mercenary intruders, focused all of its short range weaponry on the recon lance leader. Four medium lasers struck home, leaving blistered and blacked score marks across the mercenary mech's torso. Firing her jump jets Maple fell back to an exposed position on a high ridge. 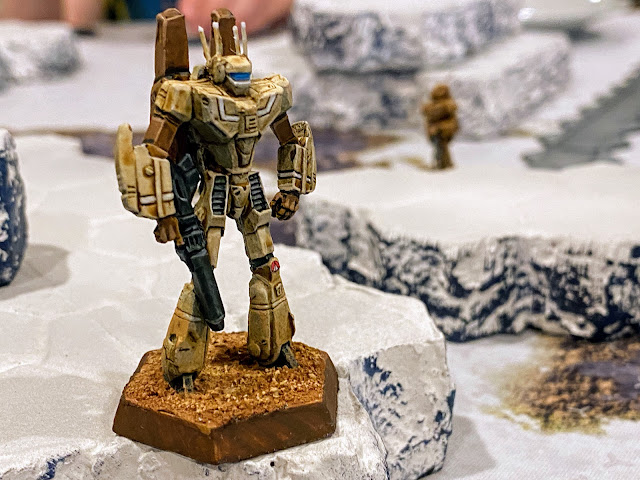 The Lyran Trebuchet turned and locked on with LRMs, unleashing a full volley from both. 24 of the 30 missiles struck home, rocking the Phoenix Hawk back with the impact of the warheads. Alarms rang in the cockpit as Sgt. Maple forced her mech stay upright.

"Getting torn up out here Cooler! What's your status?"

"Getting the data now!"

Green characters on a black background jittered across her sensor screen. A low ping signaled the completion of the data transfer. Out of the corner of her eye Cooler noticed one of the Warhammers slowly making it to the top of a ridge to the south. Its spotlight snapped on, catching the mercenary Locust in the full glare of a brilliant cone of light. Caught in the open, and having had to slow her mech's pace to draw within range of the Trebuchet, Cooler's Locust made an easy target for the Lyran mech.

The Warhammer pilot chuckled to himself, locking short range missiles onto the Locust, and finding it within the perfect range for his PPCs. The reticle turned green and he unleashed his volley.

Seeing the danger, Cooler took a panicked step backward as the blue bolts snapped past her Locust's cockpit followed closely by the vapor trails of half a dozen short range missiles. 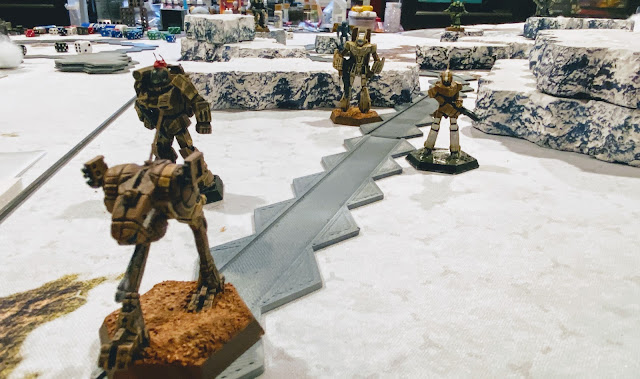 "And not a moment too soon!" Sgt. Maple turned her battered Phoenix Hawk north, dodging a few desultory final blasts from Lyran PPCs as the Raiders recon lance retreated into the night, victorious again.

Only one mech took any significant damage in this matchup, but it was one of the most tense games my son and I have played! My random enemy forces finally turned up some fitting House Steiner mechs, and unlike a previous recon mission my son chose to do a close range scan of enemy forces. He'd have to draw within four hexes of my mechs, each bristling with short range weaponry and able to deliver knock out punches to light mechs at long range. It was a tense battle as each misstep could cost my son one of his mechs.

I've been reading the old First Strike rules which has some advice on playing Battletech, including the rule about prone mechs behind level one hills being out of line of sight of other mechs at ground level. With his mechs largely outmatched he cooked up a plan to use that tactic to get into position, risking the piloting rolls to stand in order to be immune to enemy fire. He even suggested the team had been watching old training videos just before departing to explain their new found tactic.

Once I caught on to his trick I moved my mechs on top of various hills so he'd be unable to hit the dirt. Robbed of his newly discovered tactic he was forced to maneuver his Locust into a non-optimal position to scan the Trebuchet and I was sure his luck had run out. At four hexes away, caught in the glare of a searchlight my Warhammer only needed 6+ to hit. We both caught our breath as I rolled the attacks and erupted in laughter at the numerous 'ones' that turned up, saving Cooler's bacon once again.

With another recon mission under his belt, and supplies that will only last for three more missions Razor's Raiders are about to launch the final raids on the Lyrans of Parakoila.
Posted by John at 9:40 AM