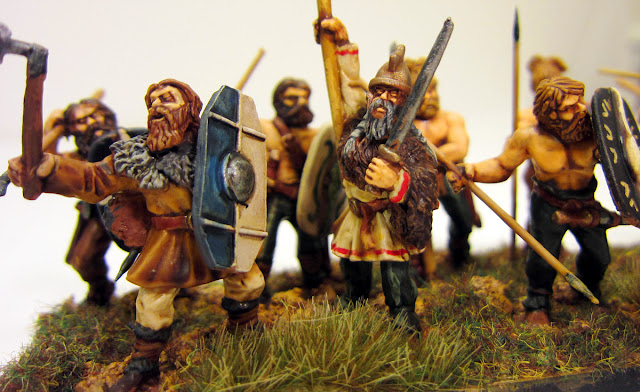 I acquired a few Black Tree Designs figures in a lot of barbarians about a year ago. I used many of them for a stand of Celts, but mixed in with the lot were a handful of BTD ancient Germans, German savages, and Picts. Trying to scrape together some stands I combined them with some Foundry Germans into a hodge podge of "german barbarians".  With the BTD sale I was able to expand on my existing figures to create a single warband of naked savages and a single warband of clothed Germans.

Having a few Black Tree Designs on hand, I thought I knew what I'd be getting.  After getting a pack of German Savages, Chieftains and Warriors recently I found there were marked differences within the range.  The Chieftains were great: crisp detail, expressive, little flash.  The warriors were of the same quality, but I was surprised that they required drilling to open their hands to accept spears.  The savages I received all bore clubs, but I noticed a number had either weak detail or were miscast. Luckily all casting errors would be covered up by their shields but it was a bit surprising.


Also, the Warriors had knobs or posts for mounting their shields jutting from their elbows.  Since these large tribal shields were held from a handle centered behind the boss, affixing them to the posts would have looked incorrect.  I simply removed the elbow posts and glued the shields to their fists properly.


Despite these drawbacks, I was still very happy with the figures. They mixed well with my existing forces and the sale price could not be beat.