Are Reaper Bones Any Good? 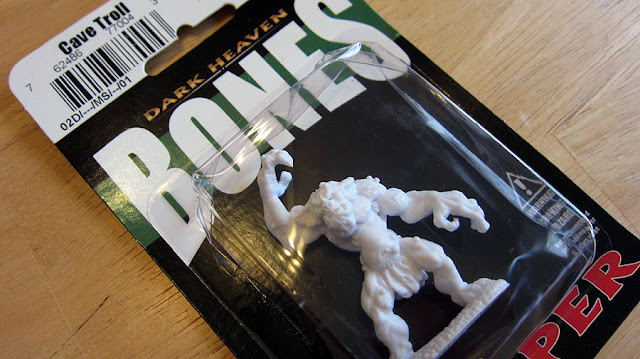 I came to wargaming via the fantasy and sci-fi miniatures expressway. I cut my teeth on Games Workshop, TSR, Grenadier and Ral Partha, and while my interest have veered towards historical wargames over the last few years, I still keep a foot in the non-historical side of gaming. A week or two ago I caught wind of Reaper's Kickstarter for their Bones line of 28mm fantasy miniatures. The Bones line is a series of inexpensive figures based on existing metal sculpts, but made from some sort of plastic.

Checking out the Kickstarter page my jaw dropped at the horde of figures they were making available to pledges, the gorgeous quality of the sculpts, and the incredible value (less than $1 per figure and dropping fast). This seemed like a deal too good to be true, but I wasn't sure about the Bones material. I'd heard it was "rubbery", that it didn't need to be primed, that it didn't have mold lines, but I was skeptical. I decided to pick up one of their existing Bones figures and put it to the test to see if it held up to the hype. All the details after the jump.


Looking through the Bones catalogue I noticed a monstrous troll that seemed to match a metal Reaper mini I had painted years ago. 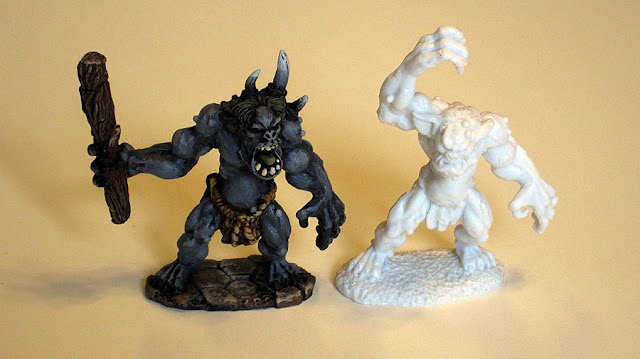 The Bones material is indeed rubbery. I heard that someone did a chemical analysis of the Bones material and discovered it's PVC. Whatever it is, it is far more flexible than I had anticipated.

The detail of the figure seemed slightly softer than a metal figure, and while there was a mold line it was barely noticeable in the unpainted figure. Still, it was a good sculpt.

Painting Up The Reaper Cave Troll 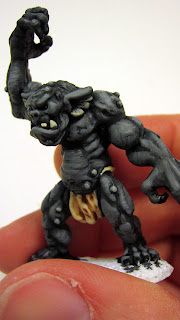 I skipped the primer and painted directly on the figure with Vallejo and GW paints, just as the rumor suggested I could.  The paint adhered well, and a single coat of Vallejo + GW Foundation gray mix was enough to coat the troll. I gave it a wash of GW inks, and then a three shade highlight.

For the loin cloth I decided to see how the bare plastic held inks and gave it a wash of GW Gryphon Sepia. While highlighting the troll's teeth with Bone White, I gave the loin cloth a Bone White highlight on the ridges of fabric, but otherwise what you see is ink over bare white plastic.

The figure painted up well and when placed next to the metal version of another Reaper Cave Troll made a good match. I was really impressed. Visions of a 160mm x 80mm base of cave troll heavy infantry danced in my head, only feasible with these large troll figures running a meager $2.50 each. 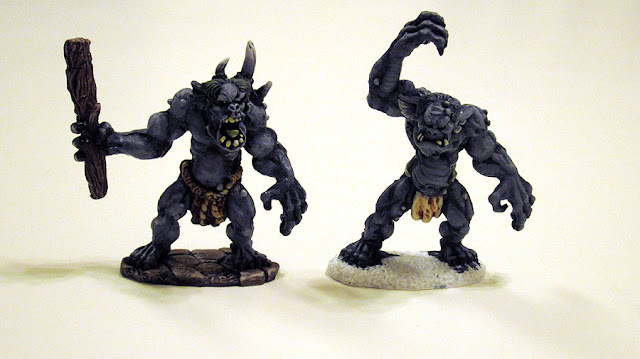 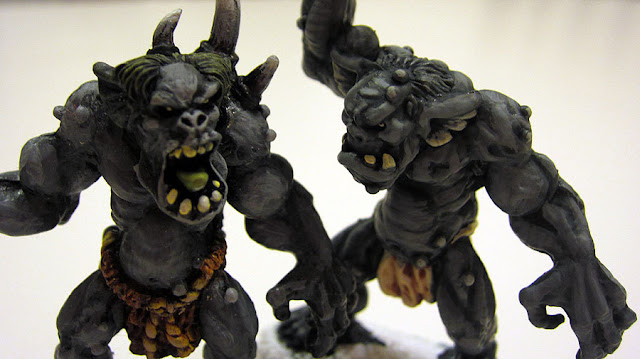 How Flexible are Reaper Bones?


These figures are pretty darn flexible. Even though I was happy with the end result of the troll, the whole purpose of this exercise was to discover if these Reaper Bones could hold up the abuse of tabletop gaming. I bit the bullet and started pushing and stretching the troll to see if I could get his paint to crack.


I finally managed to find a a crack in the paint when I pushed the troll's body back, bending at the ankle. Problem is, I'm not sure it is actually cracked paint. It may have been a hidden crevice my paint brush never touched.

Bending the troll back into position and the "cracked" paint disappeared.


Now this is without primer, without any sort of sealer or varnish, and bending this figure to the very extremes. I've seen more extensive chipped paint on metal figures with bent weapons or nicked surfaces from simple handling. In short I was very impressed by the durability of these figures! I've long held off on getting out my figures to play with my four year old son for fear that rough playing would damage their paint jobs. These Reaper Bones figures seem tough enough to be painted to high standard and given to a toddler to play with. And they are about 1/3 the cost of a metal figure.  Reaper Bones are awesome!