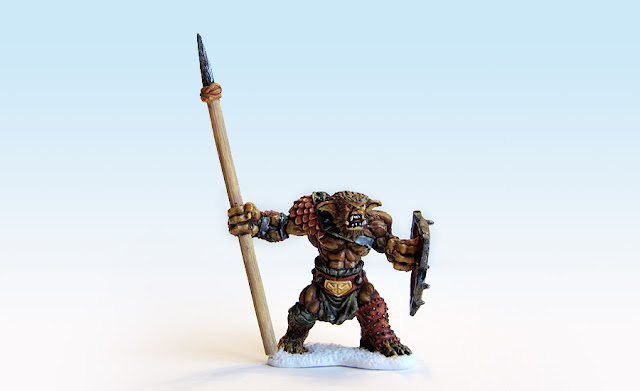 Although mine haven't arrived yet, the Reaper Bones Kickstarter shipments are wending their way across the world into eager hands, some of which have never picked up a paintbrush before. I had another Bones figure on hand to do some converting tests upon, and figured it might be helpful to go through my painting process to offer advice to folks who now have several hundred figures to paint up. Don't worry  new painters! It's not all that hard, it just takes some patience and practice. My tips after the jump. 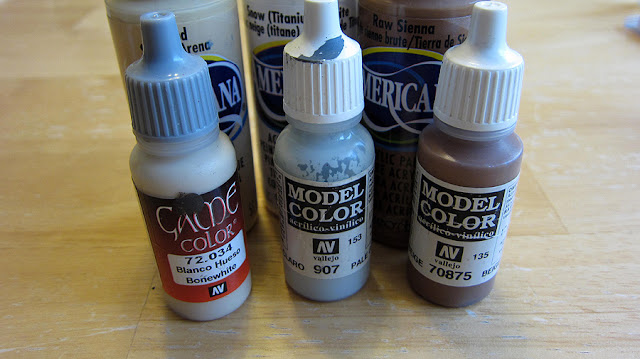 Getting started on your Bones minis might seem a bit daunting. Paints? Brushes? What to pick? For paint, I prefer Vallejo paints. They come in small dropper bottles, so you can dispense just a single drop of paint if necessary, and they are remarkably smooth and "thin". There are a number of basic sets to get you up and running (for example Vallejo Orcs and Goblins Paint Set

) or you can purchase them individually. I've found that I have more shades of brown than any other color (ranging from deep chocolate browns to khaki and ivory, with a diversions into greenish gray or warm orange red browns) because they are useful for all manner of belts, shoes, scabbards, hair, furs, skin tones, etc.

are also popular, but I found the flip top lids lead to the paints drying out after a year or two in some cases. Still, they seem to be lingua franca amongst figure painters, so it's easy to match colors when someone mentions a shade they used.

There are a number of other brands of modeling paints (Reaper, Army Painter, Coat D' Arms, just to mention a few) all of which are fine products. You should get them. 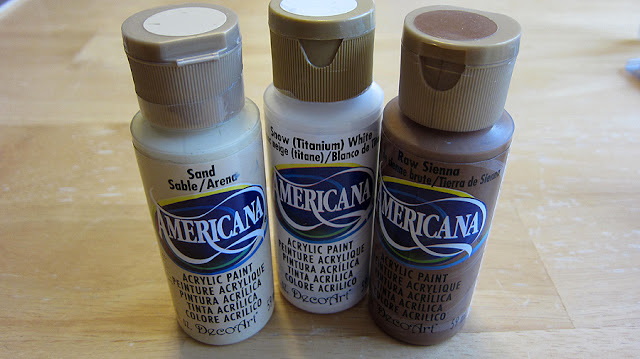 Modeling paints can get pricey though, so if you are just starting out don't feel bad about picking up some craft paints. A number of figure painters use craft paints exclusively, and produce very good results with them. They are cheaper, more readily available, and come in just as many shades as hobby paints. Color matching is a bit trickier, and I've found they are thicker and require a bit of water to thin them out before applying. I freely mix both types of paints depending on the effect I'm trying to achieve.

I go through paint brushes frequently. I've tried to go cheap on brushes, and I don't think it's worth it. Steer well clear of "watercolor" brushes (the bristles are too limp to control easily), avoid synthetic brushes if possible. I try to find some natural sable hair brushes. I picked up some Army Painter brushes

and have been very pleased with them.

Reaper Bones don't require any spray primer, but if you branch out into figures of any other material (metal, plastic, etc.) you'll need a can of spray primer to give some tooth to the figure for the hobby paints to grip. Regardless you'll want a can of matte spray to apply after finishing a figure. The matte spray cuts down on the shine from certain paints and washes, and applies a protective coat to help prevent chipping or flaking to figures that will be handled by greasy pizza fingers on the table.

for most of my priming, although I'll use a black primer or white for certain effects.  I typically use Testor's Dull Cote for my final overspray of finished models since I can pick it up at local craft and hobby shops. 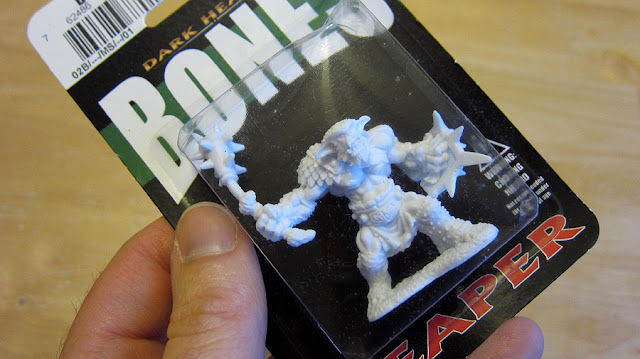 I was happy with my initial tests of painting a Bones figure. For my next test I wanted to see if they could be converted. For this bugbear I wanted to swap out its mornigstar for a spear, remove the spikes from its shield (which were a little over the top for me) and repose the shield arm so it was providing protection to the creature. 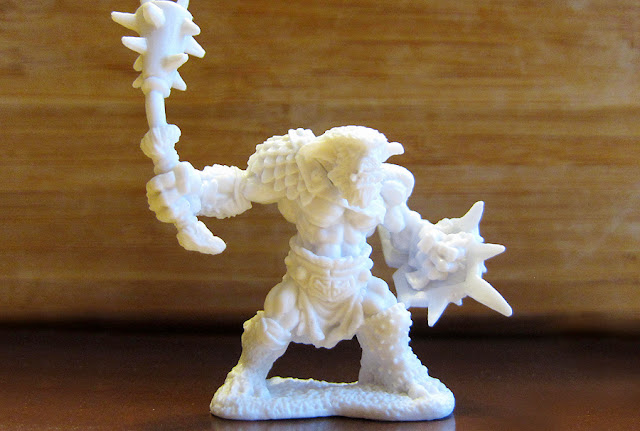 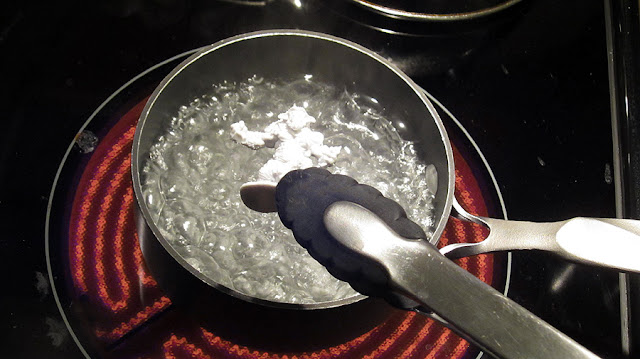 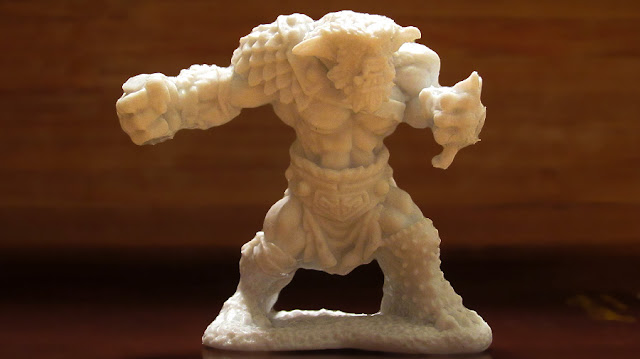 I drilled out the bugbear's weapon hand and used a wooden kebab skewer for the spear. 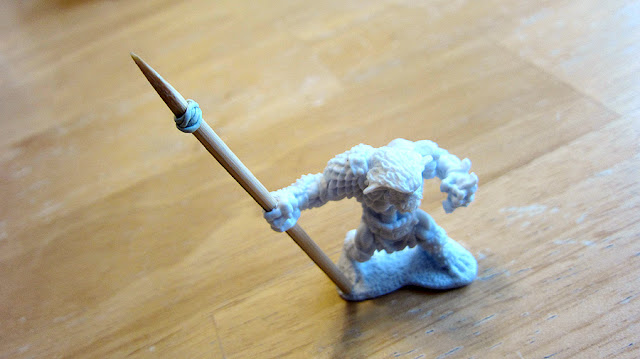 
I usually start by "blocking in" the figure by giving each surface a solid color. I hadn't quite worked out the color scheme for the bugbear, so went about it bit differently this time. I started off blocking in the exposed skin and fur. 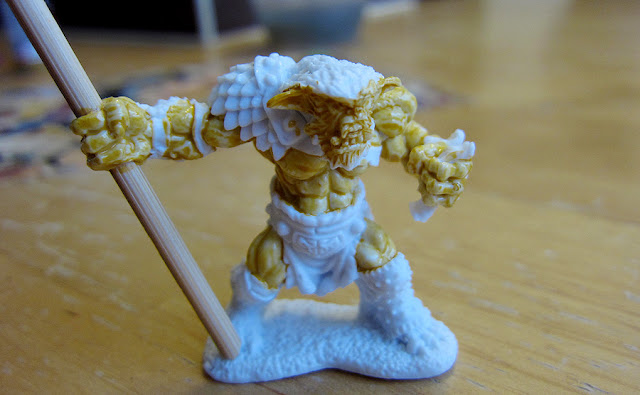 . The Vallejo paint was a bit thin, but I was pleased with how it took to the Bones material. It almost acted like a wash, seeping into the cracks and crevices of the sculpt, and leaving a tint to the raised areas, naturally shading the figure. I picked up the technique of painting "inside out" from other mini painters. Start with the flesh, then work out (clothing next, followed by boots, belts, straps and packs that are on top of the clothing) 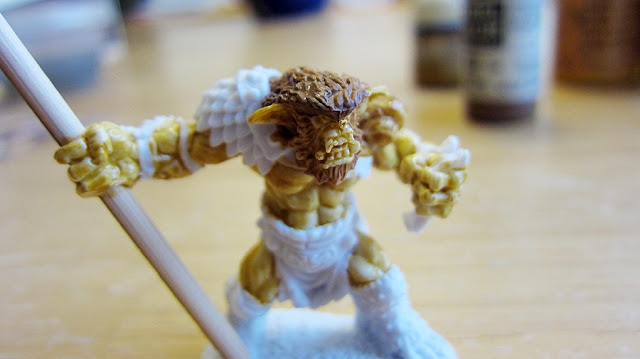 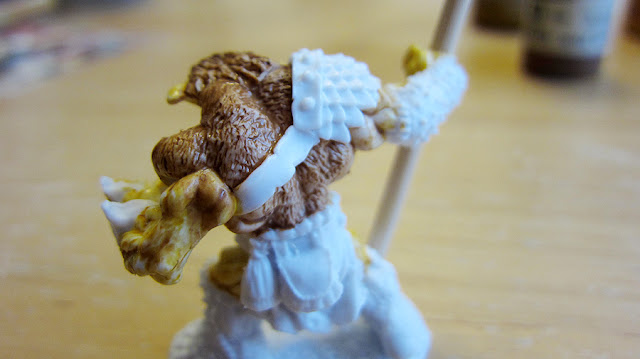 Adding Vallejo Game Color Beasty Brown to the darker fur areas on its head and back. To smooth the transition from the brown fur to lighter skin, I dipped my brush in water, the dipped it in a drop of the paint and applied it to the border between the fur and skin. The thin paint tinted the lighter yellow skin and created a smoother transition between the two. 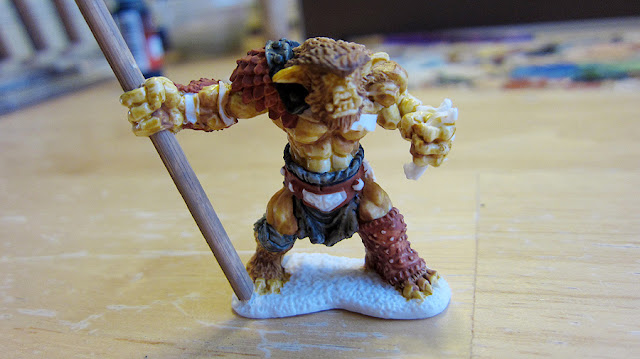 Mostly blocked in. I chose a warm yellow and brown for the bugbear, and used Vallejo Red Leather

and a dark green (a mix of Vallejo Black and light green craft paint) for the various leather armors and cloth items. I wanted the creature's fur and skin to be quite a bit darker than what you see here. The more colorful reds and greens should add some visual interest to the creature, but you can see I've left some of the straps unpainted at this point. I wasn't sure how dark the eventual skin and fur were going to turn out, and I wanted to be sure the straps placed over its skin would contrast. 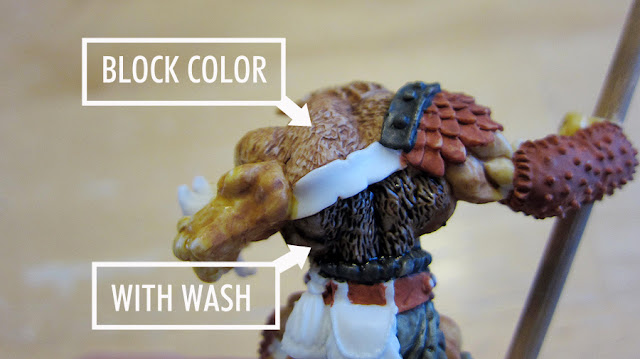 Next up I added a dark wash. I usually use Games Workshop washes, but I didn't have any in the deep brown shade I was looking for, so I created my own. I put down two drops of Vallejo Game Color Charred Brown

on my palette and loaded my paint brush with water. Mixing the two gave a very thin deep brown paint. Brushing it over the brown fur, it worked its way into the deep crevices and tinted the highlights. 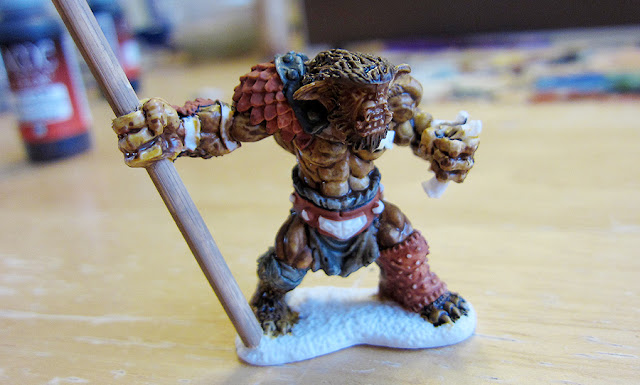 I washed all of the exposed skin and fur of the bugbear. Notice how it picked out the details of the creature's face, defined the fingers and toes, etc. 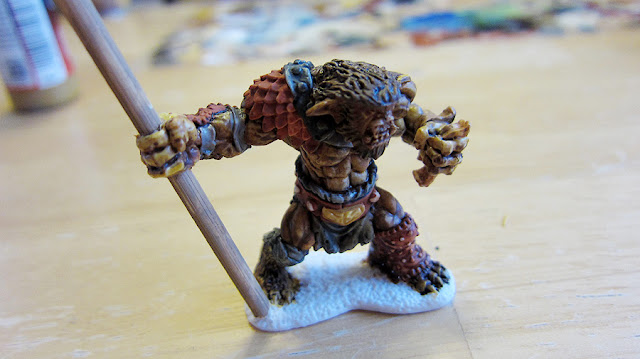 Now that the fur and skin were closer to their final color I picked a light gray for the straps to contrast with the deeper skin color, and finished blocking in the rest of the colors. With a similar wash to the other straps, belts, cloth, and armor, this figure could be considered table ready. I went on to add a few highlights and pick out some details though to finish it off. 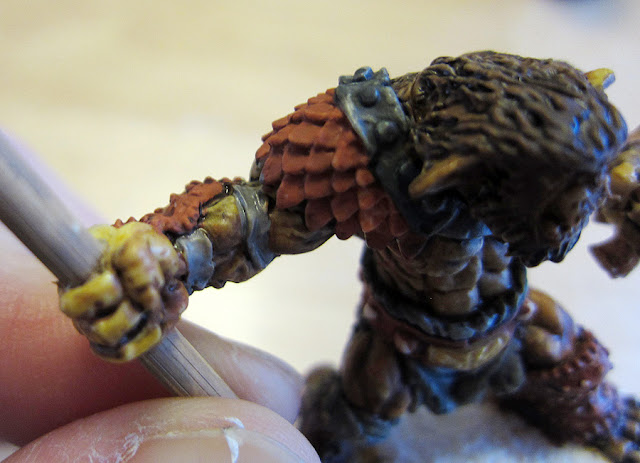 The scaled shoulder armor was blocked in with red leather (made from dragon scales maybe?). To highlight them I mix a drop of the Red Leather and a drop of light yellow craft paint. I painted the bottom half of each scale with this lighter shade. Next, I added another drop or two of light yellow to the mix and painted just the edge of each scale. It's a bit fiddly. I used my small detail brush, and hold my breath while I paint the scales. The goal is to get a suggestion of color on each scale, so that at a foot or two of distance the scales "pop". 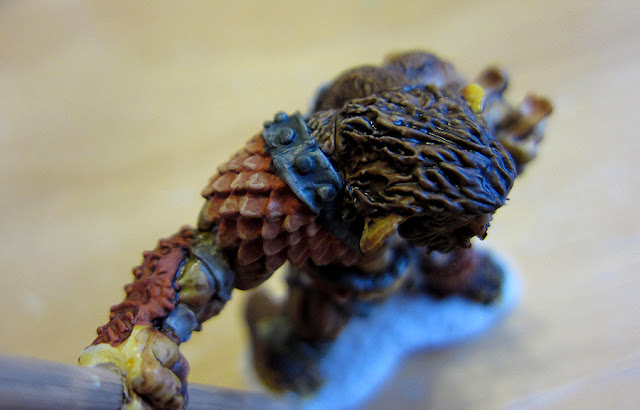 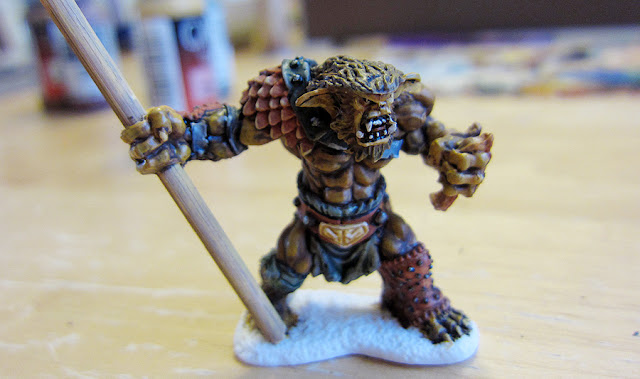 For metal studs, I painted each black and placed a dot of Vallejo Oily Silver on each one. Teeth were picked out in Vallejo Bone White, tongue in Red Leather, and raised surfaces of the skin (knuckles, the edges of his pecs, thigh muscles, etc.) were given a dab of Vallejo Plague Brown. I wasn't happy with the original shield, so I used the boiling water method to flatten it, then reglued it with super glue into a more traditional position.

I left the base unfinished as I'm planning on creating a unit of these creatures for some mass fantasy battles in the future and will base them all together, but that's a post for another day. 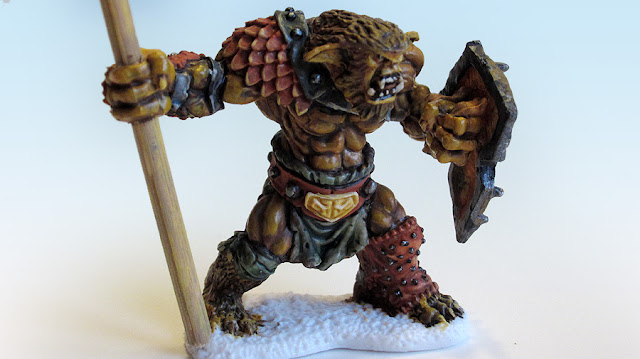 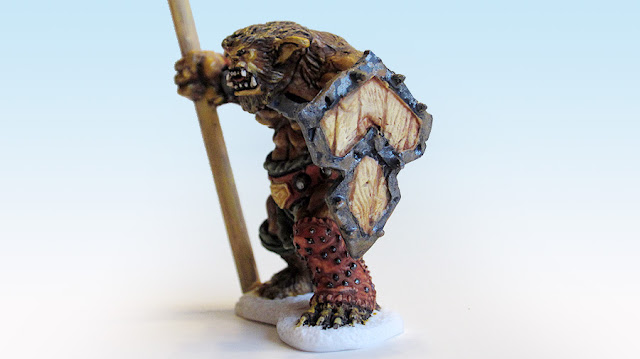 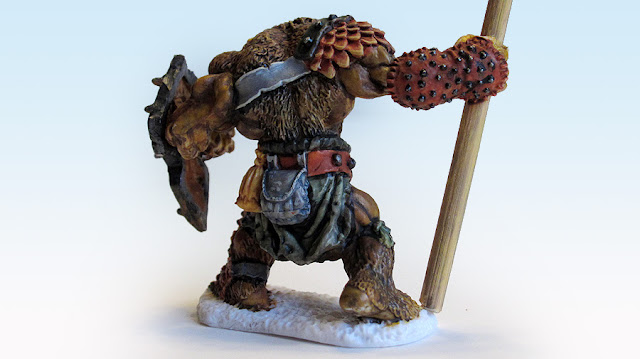 One of the big revelations to me in painting this bugbear up is how well it takes thin paints. The white color of the Bones material allows you to gradually build up colors by applying multiple layers of thinner color. Also, the details on Bones are good, but comparing them to metal versions I think they are a little shallower. I'd be very careful in applying thick paint as it is likely to settle into crevices and obscure detail more easily. Good luck with your own painting! Patience and practice is all it takes :)
Posted by John at 9:44 AM