My Review of Roman Velites by Agema Miniatures

Finally! Many years ago when I decided to tackle ancients I settled on the Punic wars as the period I wanted to concentrate on. Hannibal's motley assortment of mercenaries from a dozen cultures up against a young, scrappy Roman republic fired my imagination. I've been delaying committing to a manufacturer because I've been waiting for the plastic revolution to produce a line of Romans from the early Republic. I was excited by rumors of Warlord and Victrix getting into the period with new plastics, but was surprised when new manufacturer Agema Miniatures was first to market with a set of Roman Velites (light skirmishers) in plastic. Follow me for a review and pics after the jump...

Rome during the early Republic was not the military juggernaut of later legend. There was no professional standing army, but most Roman males could expect to spend a portion of the Spring and Summer fighting the neighboring tribes of the Italian peninsula It was the conflict with Carthage, when Rome began squabbling with a city state on a totally different continent (largely over colonies outside of Italy and maritime trade routes) that Rome evolved from a local, tribal power to one that looked beyond Italy to become the world dominating Empire hundreds of years later.

When they went to war the Romans of the 2nd and 3rd century BC fell into ranks based on age or experience. The rear line was held by the oldest men, the triarii who would only enter battle once the fighting got desperate. In front of the triarrii were the princepes and hastati, younger men who could expect to do the bulk of the fighting. Screening this main body were the velites (vel-it-TEEZ ), the youngest or poorest men who would would be the first to engage the enemy. Lightly armed with javelins and only a small buckler or shield, the velites were expected to disrupt enemy skirmishers, chuck a few pointy sticks at the enemy and then retreat behind friendly lines once the main forces converged.

Polybius describes the velites carrying "a sword, javelins, and a target...strongly made and sufficiently large to afford protection, being circular and measuring three feet in diameter. They also wear a plain helmet, and sometimes cover it with a wolf's skin or something similar both to protect and to act as a distinguishing mark by which their officers can recognize them and judge if they fight pluckily or not."
Save for the wolfskin "or something similar" there's not a lot to distinguish velites from similarly armed light troops that would have been found in any army at that time. So how did Agema Miniatures do? 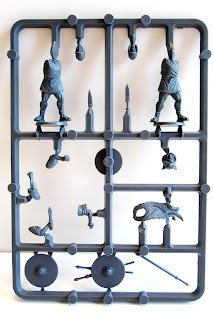 I was psyched when I heard Agema Miniatures would be producing plastic 28mm Republican Romans, and they were kind enough to send me a sample sprue from their first release. The sprue comes with parts to build a pair if skirmishers, one armed with a gladius short sword and one with javelins. Three heads are included, two in helmets and a third in a wolf skin. A separate wolf cloak can be attached to accompany the wolf skin head for a complete pelt. All told, there's a good variety of options, although the choice to arm them all with either javelins or gladius would have been a nice perk.

The individual sculpting is excellent. Mold lines are minimal, but even the actual detail of the figures was surprising. The fingers on the hand poised to hurl the javelin are arched just so, holding the weapon lightly ready to be thrown. Even the fist gripping the shield has a slightly raised middle finger to accommodate the bulk of the figure's palm and shield handle, a detail that's likely to be obscured by the shield boss. The thigh muscles as well show the figure's weight distributed unequally from one foot to the other and the cloth tunic shows deep, natural creases. I was quite impressed with the level of detail on Agema's velites. 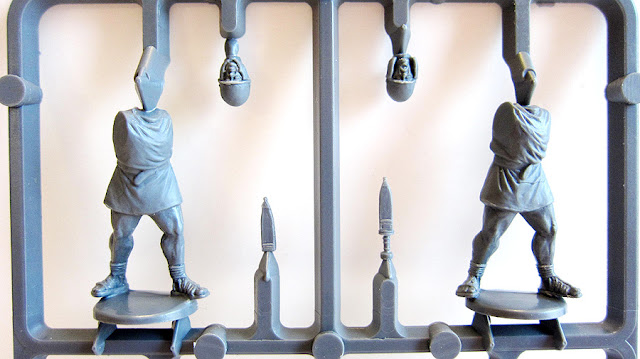 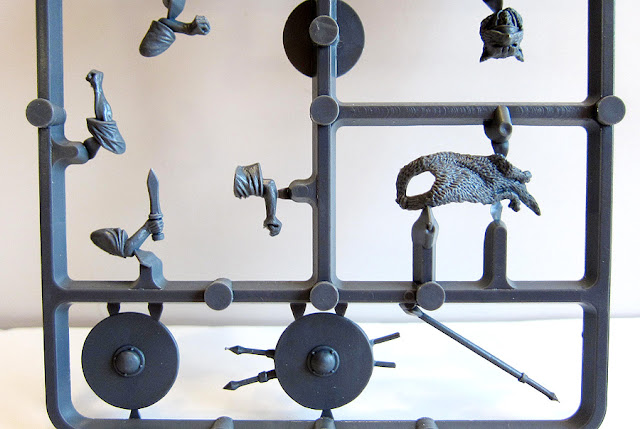 I'm used to fiddling with the poses of Wargames Factory figures (such as their vikings) to get a pose that looked natural. The flexibility of multipart plastics always seemed to come with a trade off in producing poses that look stiff and unnatural to me. That's not what I experienced with these velites. I tried several combinations of arms and torsos and was happy to find that any combination looked natural.

Naturally, the figures were a breeze to paint up. I tried out the Dallimore layering technique rather than my usual wash, but I'd really like to see how the tunic creases would take a wash or the dip. Pretty sure they'd look great. 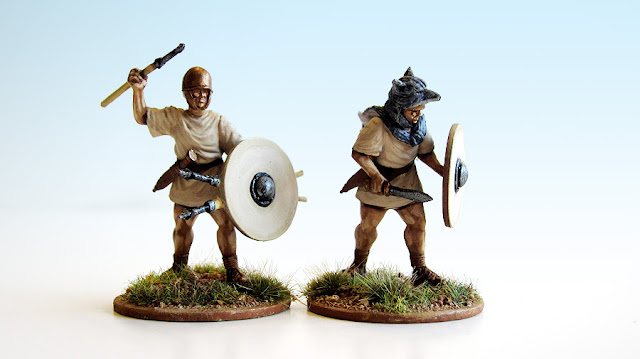 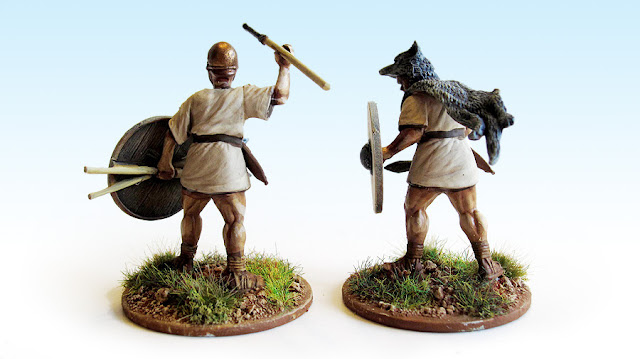 Update: Based on requests I've added a few comparison pics. Sadly, I don't have many Republican Romans to compare the Agema velites to, so I had to make do with the figures I had on hand: a Crusader Miniatures officer, a Warlord Praetorian, and some Wargames Factory Caesarian Romans.


Overall I was thrilled with Agema's velites. The realistic proportions, attention to detail, inclusion of an extra head, and the flexibility in posing were everything I was hoping for in early Roman plastics. The velites will be available at Salute at £9 for 16 figures ($13.80 US), and Agema is already soliciting feedback for the expansion of the range with the possibility of a Kickstarter to help ramp up production. I've got a few requests in mind for the rest of the line, but how about you? What would you like to see in a full line of plastic Republican Romans?