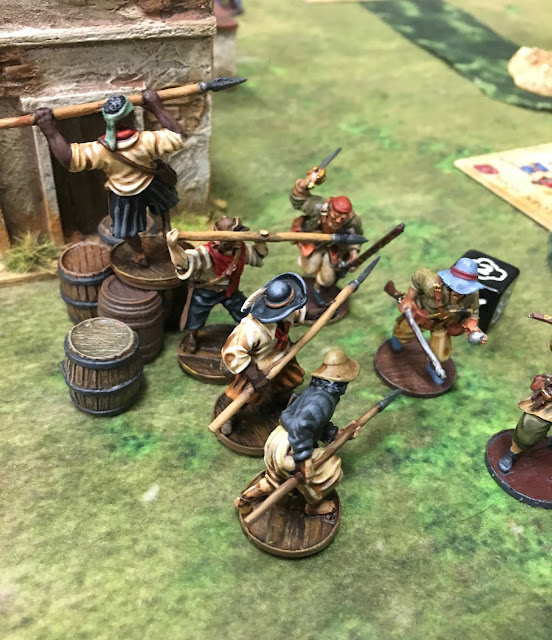 With my jungles finished, my lanceros painted and my Spanish dwellings ready to be raided, one of my usual gaming buddies Chris and I finally got some of our forces from the Blood and Plunder kickstarter on the table.

Being our first game we stumbled through the rules, but were able to dig in enough to get a good feel for how the game plays. Buckle your swashes and join me after the jump for our initial impressions.

What is Blood and Plunder?

Blood and Plunder is a 28mm historical miniatures game set in the Caribbean during the 17th century. Pirates have reared their head in pop culture over the last decade largely because of Disney's Pirates of the Caribbean flicks, and their fictional swashbuckling adventures have gotten all mixed up with curses, zombies, magic and other supernatural phenomenon. You'll find none of that in Blood and Plunder though, as this is a historically accurate set of rules, with the first chapters of the rule book dedicated to the history of pirates across the Spanish Main, and historical figures appearing as personalities to use during your battles.

There's plenty of rules for ships, artillery and fortifications, but for our initial game we stuck with a land based battle.

My Spanish militia squared off with a ragtag band of pirates (or Brethren of the Coast as their identified in the rules). This being a skirmish game, my figures were grouped into units of four models. Players have some choice in how to build their units and my opponent had fewer total units, but several had 6 or 8 figures in them.

Each nationality has four flavors of troop, each with just a few stats and a handful of abilities. My musket armed milicianos could deliver a volley of fire with their Drilled special ability, but being Untrained would be less effective in combat than some of my other figures. I also had some spear armed lanceros and a handful of native indian scouts.

We each also had a commander attached to our units, but for our inaugural game we chose fairly weak "Untested" commanders. Our commanders would each be able to dish out one extra action to units within their command radius, but more experienced commanders can bring additional abilities to bear. Named commanders such as Henry Morgan bring a wealth of abilities and allow the player to tweak the abilities of the models under their command.


We diced to see which side would be the attacker and picked a simple scenario that saw our two armies battling over an objective in the center of the table over the course of 6 turns.

Card Based Initiative and Activation

Initiative and activating units is handled through a deck of cards. You can use a standard deck of playing cards, but we each had decks provided by Flintlock Games that had additional info on each pertinent to the game.

After drawing one card per unit under our command, we each secretly picked one card and revealed them simultaneously. The order in which the cards are resolved is determined by their suits, but cards that resolve faster grant fewer actions to the unit they activate. We had many tense moments trying to decide which card to play, trying to guess what the other player was planning, deciding if the unit we wanted to activate could survive on a slower card that would give them more actions. 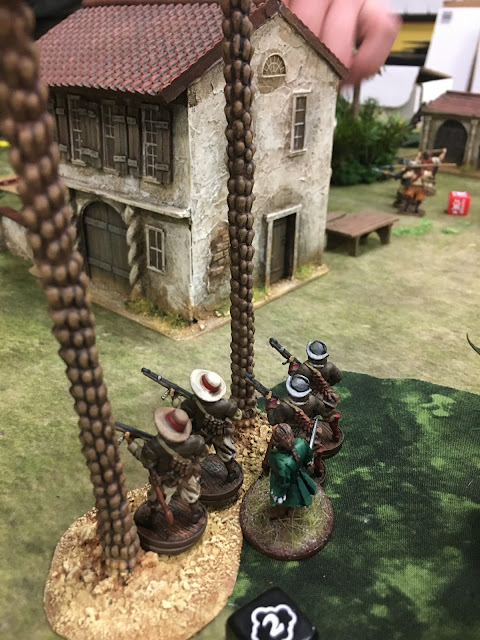 For each action granted to a unit, it can move 4" or launch and attack or undertake a host of other activities (that we largely ignored for the time being.) Firing weapons assigns reload markers to the unit, preventing the unit from firing again until they were cleared by using a reload action. Attacks use a fairly standard to hit / save series of rolls, with additional rolls to assign fatigue to unit after it comes under fire.


My untrained milicianos would only get a single action on a fast card so I tended to try and play slower cards that granted them up to three actions to use. Unfortunately, they were also Poorly Equipped meaning that when they were activated on a club they'd get three actions, but would suffer an additional reload marker if they fired during that activation.

The whole system incorporates lots of small decision points. Which card to play? Which unit to activate with it? Will that card trigger additional abilities or drawbacks inherent to that unit? Do I need to rally and remove my fatigue markers, reload, retreat into cover, dash into melee? And while we stumbled through the first few rounds, the rules are pretty intuitive and by the end of the session we had them down. I like that. After I got home I flipped through the "army" section again to look at customizing my force. There are a few options, but this isn't like some of the other games I've played lately like Song of Blades and Heroes or Star Wars Armada with dozens of options for customizing your army. There might be some of that in the part of the game dedicated to outfitting your ships, but I'm ok with taking a break from list making to concentrate on more scenario based games.

Overall really pleased with the rules and had a blast playing. After the game Chris and I agreed we couldn't wait to get back to it, and will be jumping back into the Caribbean next week. Come in, the water's fine!
Posted by John at 1:21 PM