Following their defense of the logging camp, my son's mercenary battlemech company were able to determine the location of the pirate camp.

After hastily repairing and rearming some key machines, the company set off to finish their mission. I also took this opportunity to introduce a scenario structure closer to one of those from the Campaign Operations and Sword and Dragon.

As this was the final scenario of this contract, I went all in with the scope of this track. My son's mercenaries would be able to field two lances of 'mechs against a single lance of pirates. The pirates would be fielding some of the survivors of previous battles (hastily repaired, but still severely damaged) as well as two heavy 'mechs (including Medusa, the elite mechwarrior the mercenaries were unable to catch since they deployed to defend the logging camp instead). 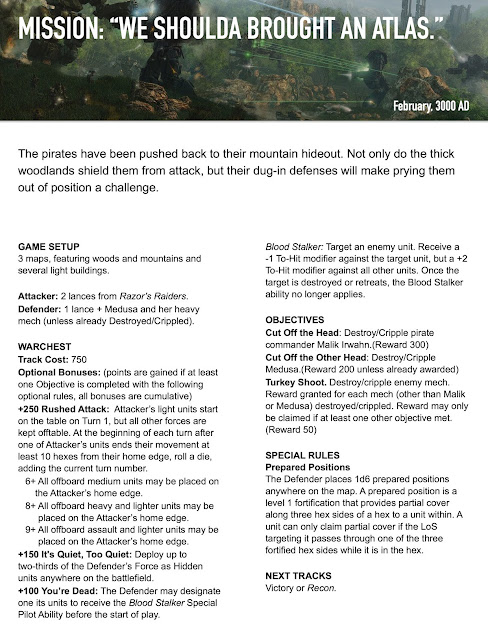 Considering his options, my son chose the "Rushed Attack" and "You're Dead" options. His light forces would start on board and need to rush to the center of the battlefield to trigger his slower forces ability to arrive on the battlefield.

My pirate defenders were able to place three hastily prepared mech defense fortifications on the table. With our right and left flanks covered by woods, I placed them in the more open central map zone.


Balancing Battletech was tricky when we were playing 20 years ago, but I decided to trust the most current point system to create a scenario I thought would be tough, but winnable. My son's mercenaries had light and medium mechs and were facing a pair of pristine heavies. The rest of the pirate force was made up of three medium mechs, but all had been savaged in earlier battles.

The mercenaries' mission was to kill or cripple the two heavy pirate mechs. I decided to go "by the book" and use the Forced Withdrawal rules for the pirate morale since this was their last stand. Under my morale rules, mechs would start bugging out once enough of their allies had been destroyed or damaged. Under Battletech's Forced Withdrawal rules, mechs didn't depart the battlefield until they are truly crippled (most weapons destroyed, legged, etc.) and don't seem to respond to friends withdrawing.

Survival of the Fittest

"OH MY GOD WHY WONT THEY DIE," my son exclaimed in exasperation. His rolls had been fairly poor, and splitting his forces up so they couldn't support each other became a lesson in "how to concentrate your fire" or not, as the case may be.

As we took stock of the situation we realized we'd been playing FOR SEVEN HOURS. "Ah," I thought, "there's the Battletech I remember." We decided to work out the situation using my morale rules, and realized the pirates would have fled the field several hours previously.

We played a few more rounds (my son was determined to finish off the pirate leaders), but I decided to call the game as the merc's sporadic fire wasn't close to even breaching the heavy pirate mechs' armor.

While the game was unresolved, we came to a compromise to allow the campaign to progress, summed up in the liaison's report to daddy moneybags back home. 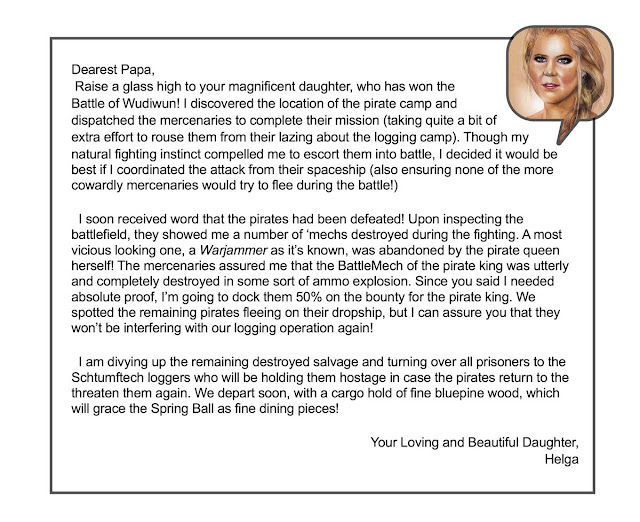 It wasn't the most satisfying end, but it was a good lesson for me: don't trust the rules when they create a crummy game experience. All day Battletech games may work for other players, but they don't for us. I already knew that, and knew that playing 'rules as written' probably wasn't going to work. I should have trusted my gut and stuck with morale rules that had proved more than adequate in previous games.

My dissatisfaction with this interminable game did force me to reconsider Alpha Strike. Once I sat down and read through the rules in detail, I can see quite a bit that I like about them. We'll give them a try in our next outing to see how they compare. Plus, we haven't given up on Battletech. My son and I are signed up for a Battletech game at Historicon that we are both looking forward to.