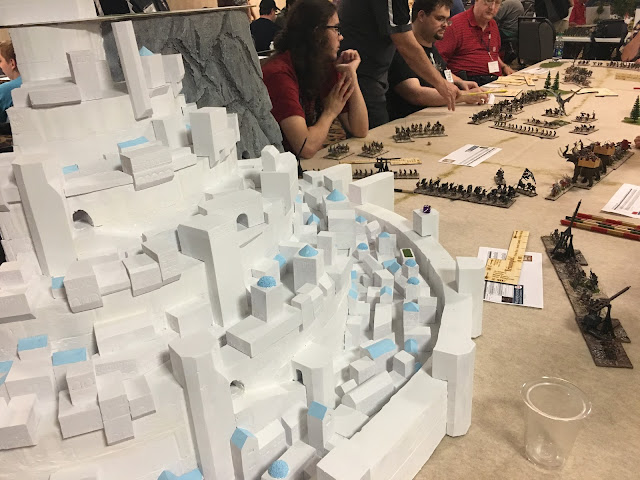 We're back from Historicon 2018 with a photo dump and impressions of the convention. Check it out after the jump!

I've been to many wargaming conventions, but this was the first in which my 10 year old son would be gaming with me the entire time. I had to skew many of the games we played towards subjects he was interested in. Happily, I've been brainwashing him for a decade so he likes everything I like.

We arrived Thursday night, too late to pick up badges so we checked in to our room at the Best Western Paul Revere, about three miles east of the Lancaster Host. The rooms were fine, but breakfast was pretty lousy. Driving up and down the strip, I spotted a new Hilton-brand hotel next door to the Host which we'll probably try for the next convention in Lancaster. Fingers crossed the renovations at the Host work out, but I'm going to hold off until some other guinea pigs try out the refurbished rooms and give us the 'all clear' signal.

My son and I arrived a little after nine, and after navigating the maze of construction found the pre-register check in. Clearly HGMS has been working on registration, because we were checked in, badged and on our way in less than 90 seconds. I really like the new badge and ticket printing process, and after hearing so many complaints on TMP it's nice to see that at least one of the convention's persistent bugbears appears to have been finally slain.

Our first game was the Battletech Grinder, where we were able to play against an old college friend of mine and his two kids. We had a lot of fun, although having played mostly original 3025 mechs the various new Clan style mechs and weapons were quite a surprise.


I did manage to pull of a classic Battletech move of scoring a pilot killing headshot against a pristine enemy mech.


The terrain set up was fairly spartan for the Grinder, but a nearby table hosted a Clan battle over a city complete with high rises and gridlocked traffic. 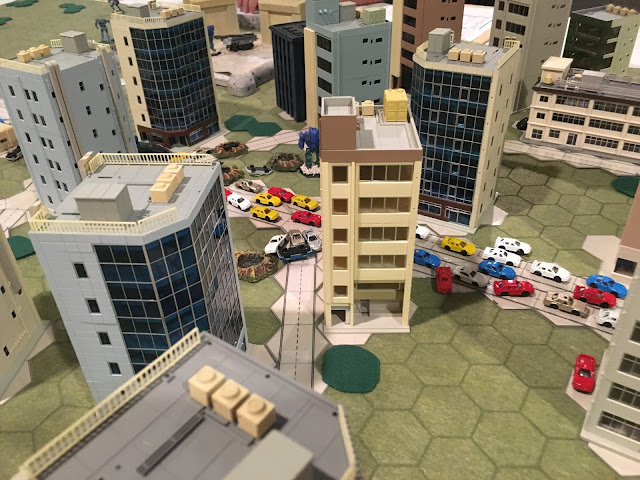 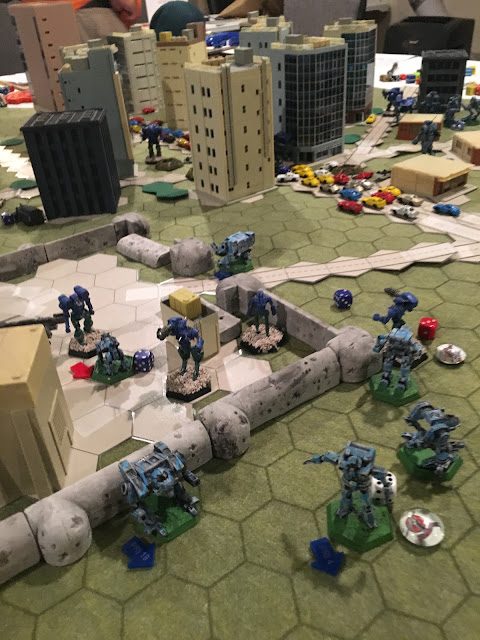 Our second game of the day was Miles Reidy's SOCOM and Sorcery. We played the WWII themed version at a previous Historicon and had a great time, so had to give this version a try. Miles tweaked the set up this year, adding some dinosaurs to the hidden jungle in the center of the table. My son also swears there were minor differences in how Miles handled monster spawning and treasure, but I honestly can't remember the previous game to the detail that he did.


My son was over the moon with this game! We were joined by Jared from the Saturday Scrummers, and managed to pull off a win (with copious input from the GM who decreed that 'kids always get to win'), but I hope all the players had as much fun as we did. This proved to be my son's favorite game of the convention, and he's still talking about it days later. 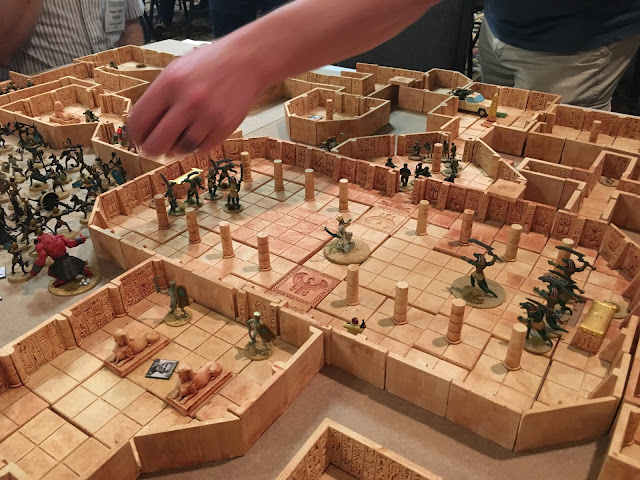 Great fun! Looking forward to playing the next Reidy game!

We also spent some time in the vendor hall shopping and trying demos. I spent close to an hour talking to Mike Tunez from Firelock Games about his new fleet battle game and the upcoming kickstarters for Blood and Plunder. 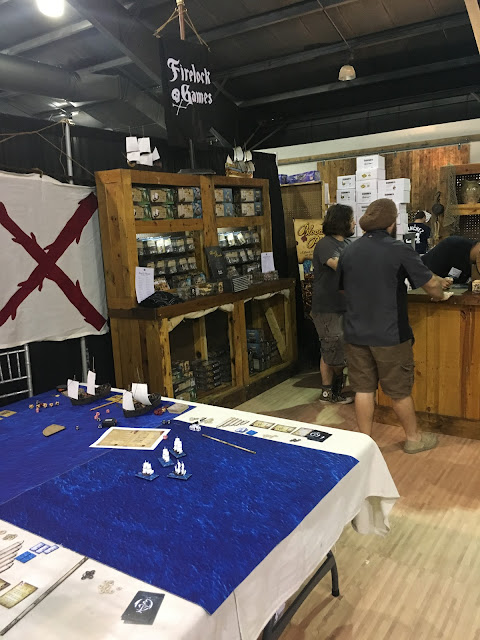 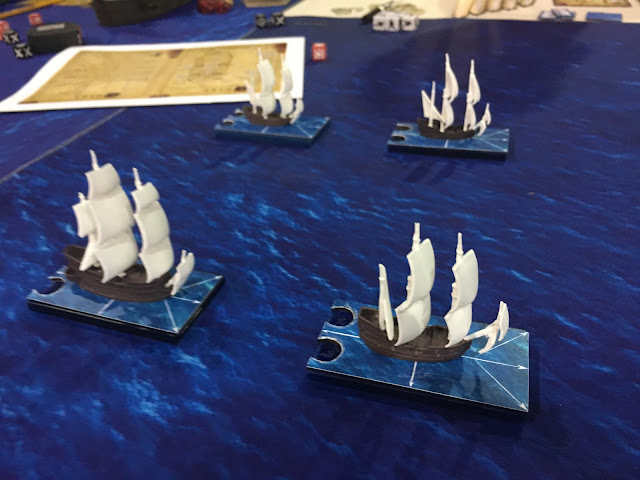 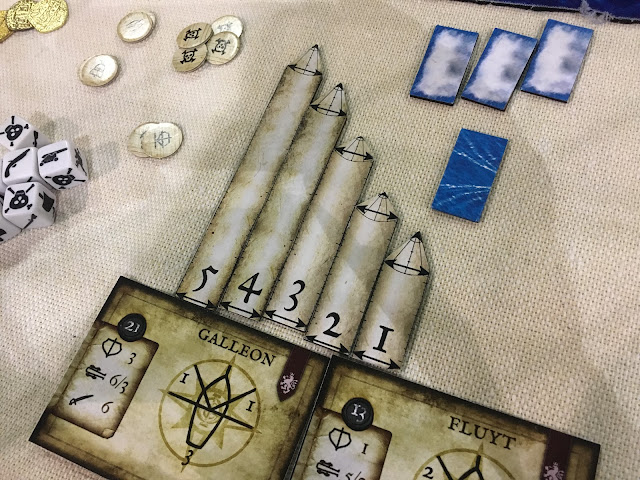 
I've played in a bunch of Pete's games, and I know there must be something about the way his games unfold that rubs gamers of a certain mindset the wrong way, but I've enjoyed all of the battles I've taken part in. My son and I got to command some Hessians in the Battle of Monmouth, and while my son's patience was ground down by the pauses between action by the end of the game, I thoroughly enjoyed myself.  He also wound up declaring the game "a lot of fun!" when we were done, so I'm chalking his earlier frustration to late afternoon antsiness.

We also took time between games to tour the various halls, snapping pics of the games we weren't able to join. 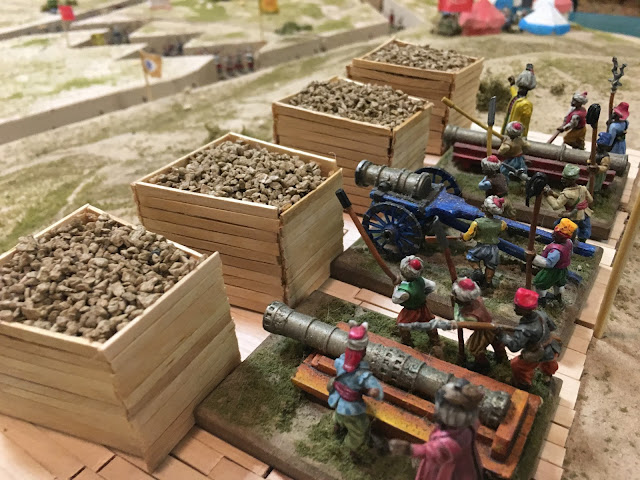 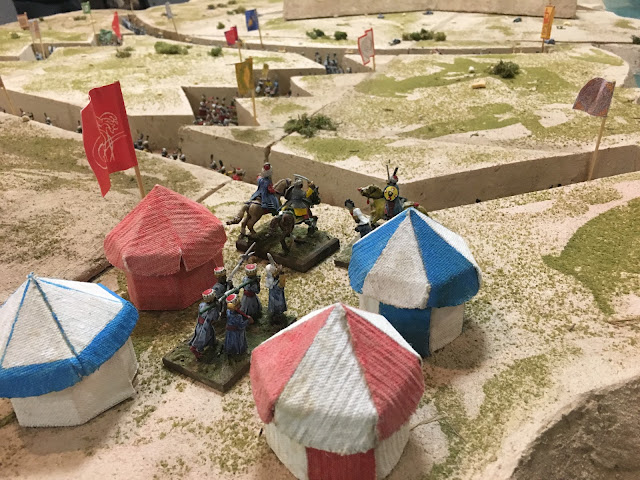 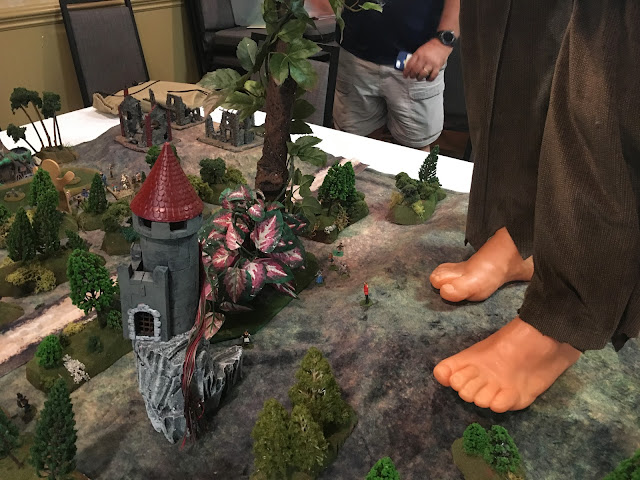 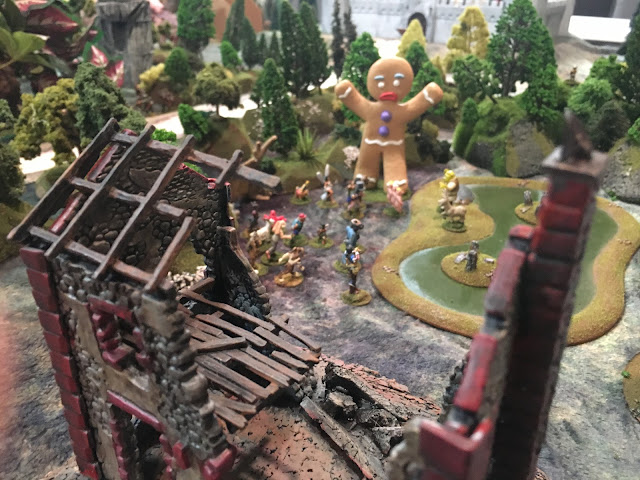 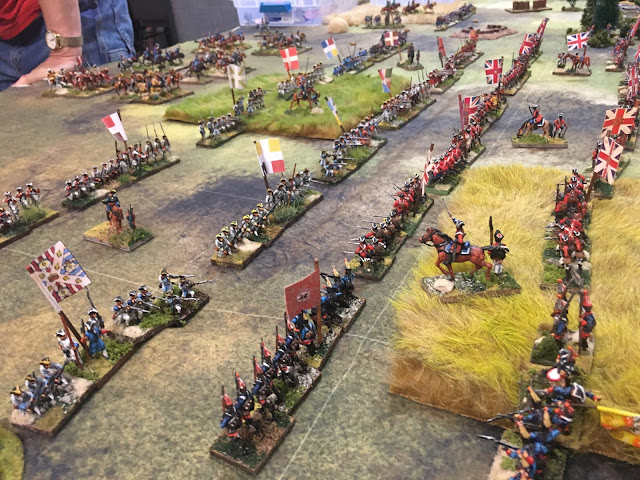 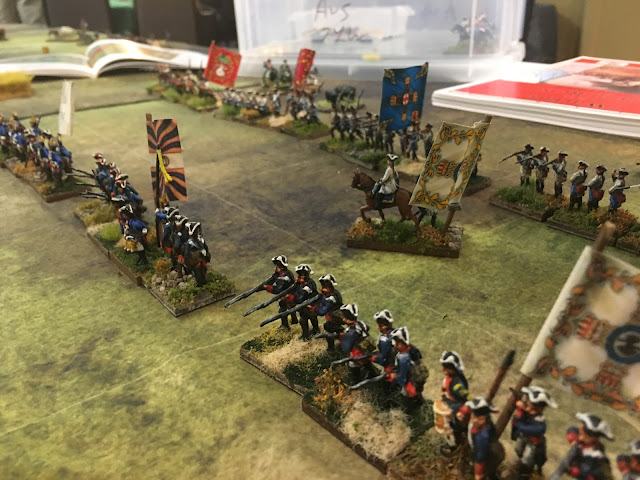 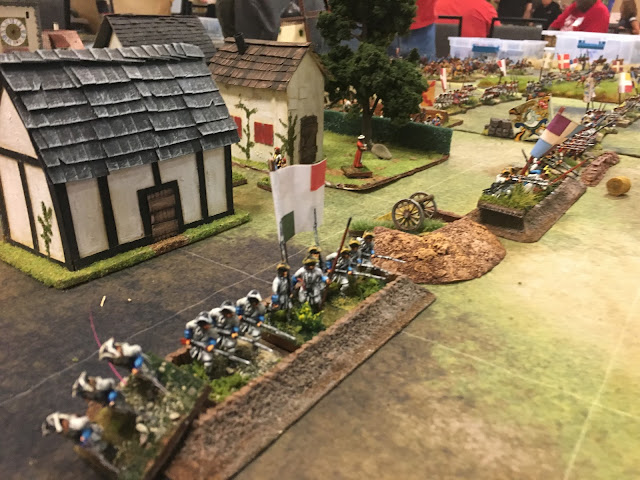 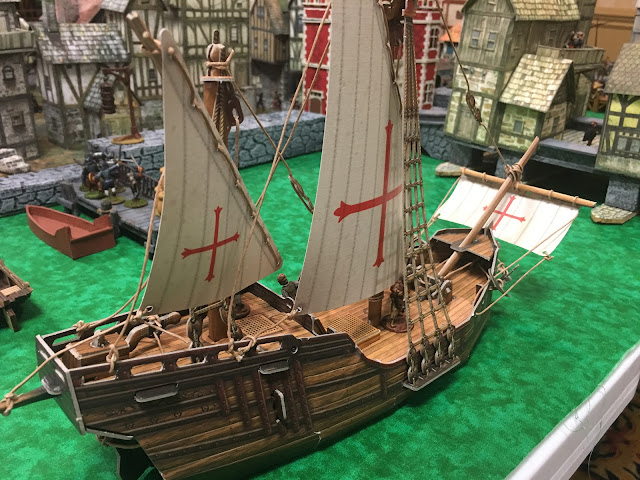 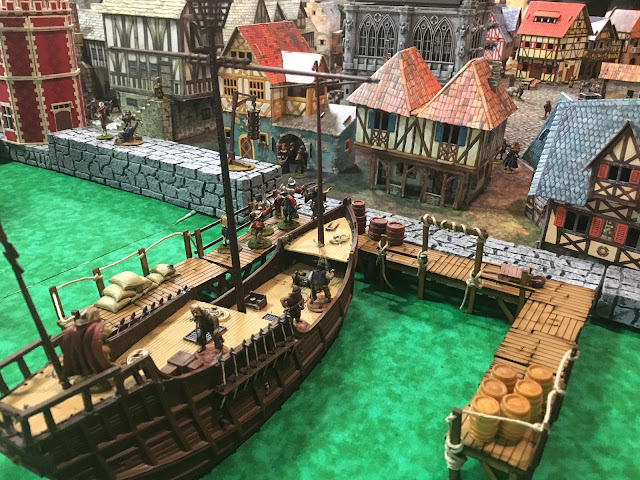 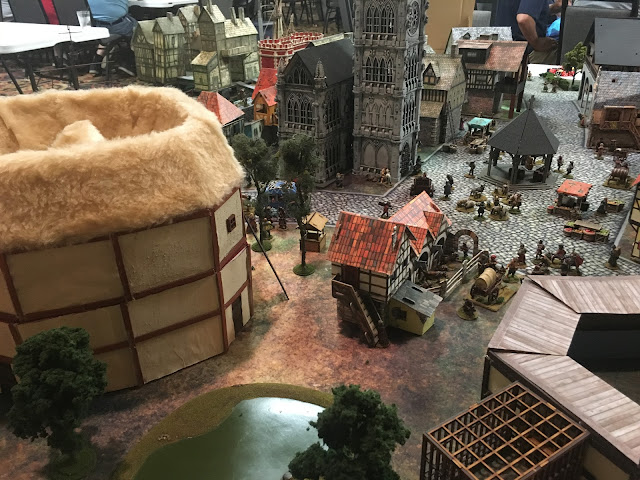 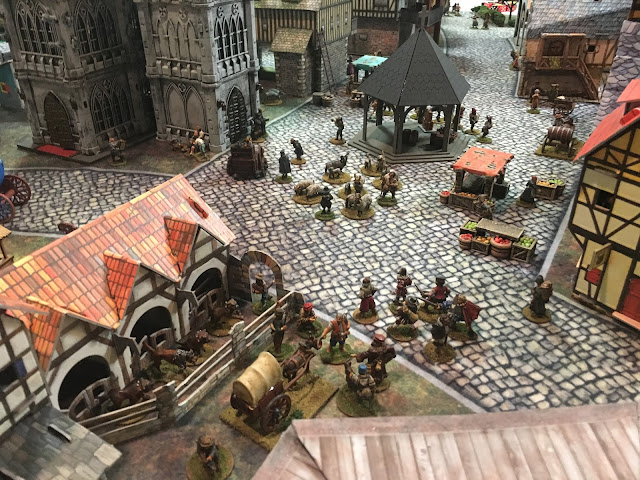 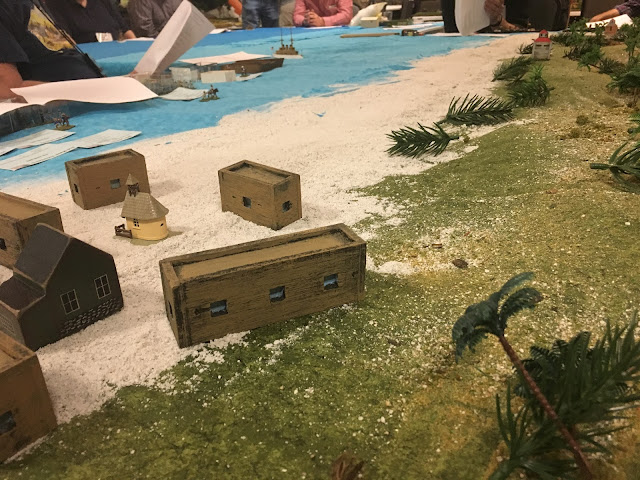 And of course, I dropped a ton of money in the vendor hall. Do you want to see it? OK, sure, here you go: 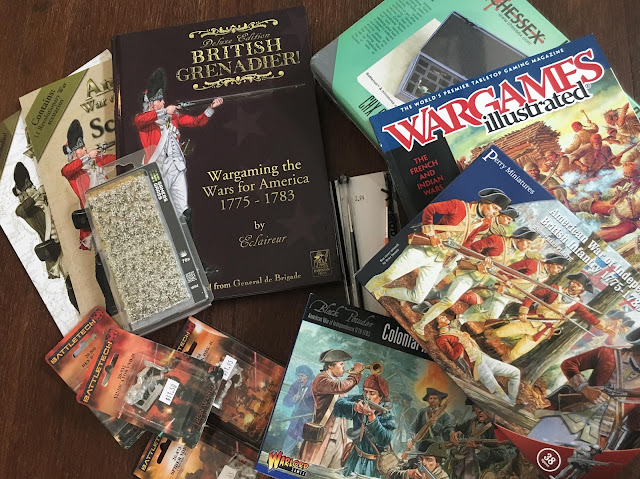 I had to pick up a few mechs for our ongoing Battletech campaign. I've been putting off getting started on AWI for 10 years, but my son and wife have been tearing through Revolutionary War books lately. I figure now's the time to strike when I can cajole some of my family into games pretty easily. Hoping to get together enough figures for just a small skirmish for now, and we'll see about some big battle games in the future.

Over all a great time and I'm really glad we went. Looking forward to next year!
Posted by John at 4:14 PM