The desert world of Vantaa is riddled with canyons and this battle would be fought in treacherous terrain. We laid out two canyon maps end to end. The salvage was mounted on a recovery vehicle which would have to make the trip from one short end of the battlefield to the other. 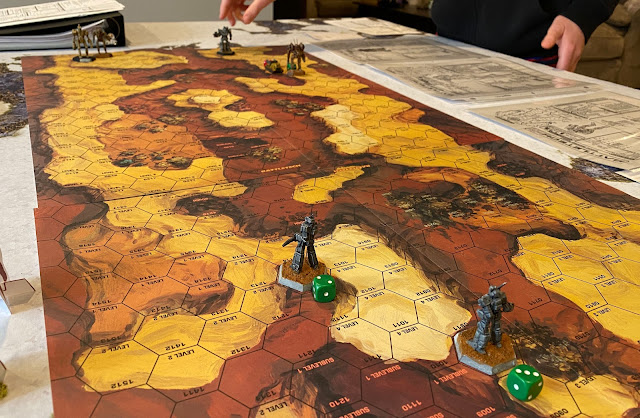 My son's mercenaries divided their forces into two groups, each traveling in parallel along the lip of a canyon.

The battle began with the appearance of two Lyran scout mechs, a Wasp and a Stinger.


Under our house morale rules, the mercs had a morale rating of 17, while the outnumbered Lyrans were sporting a lowly a 8 morale. If the mercs could put the two scouts down quickly the Lyrans would call off the attack. Unfortunately, the two bug mechs used their jump jets to reach unassailable positions.

As the mercs slowly made their way forward, the Lyran scouts were joined by trailing forces: a PPC armed Vindicator and a heavy Quickdraw mech.


The Quickdraw peeled off to slow the two mechs furthest from the recovery vehicle while its three companions launched their assault, intent on disabling the salvage truck.

The Vindicator snapped off a long range PPC at the truck, needing a 12 to hit and rolling the required box cars! Yikes! The truck raced into cover behind a ridge while the two Lyran scouts closed in focus on the truck.

With the recovery vehicle out of sight from the Vindicator it fell to the two 20 ton scout mechs to finish it off. They leapt forward into range of their light weaponry, but put themselves into peril when the mercenary Wolverine used its own jump jets to get behind them. 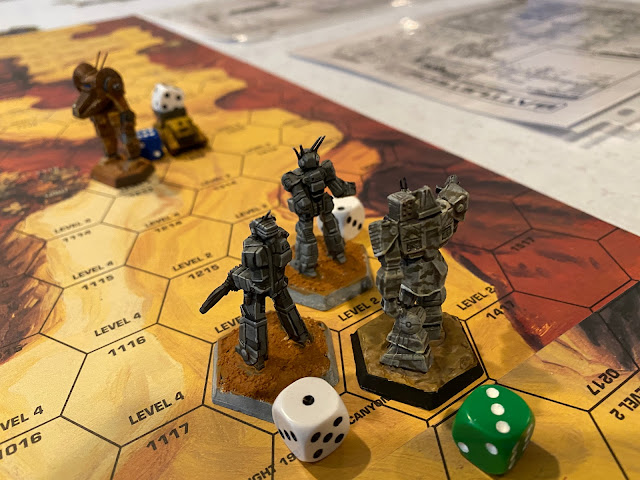 The mercenaries turned their attacks on the pair of scout mechs which were surprisingly resilient. I was certain both bug mechs would be put out of action almost immediately in this battle, but the damage scattered across their frames didn't put them down for several rounds.

Across the canyon, the pair of mech giants continued to trade blows. At one point the Vindicator was sent down after failing the piloting roll required by suffering over 20 points of damage. A small victory that would not last. 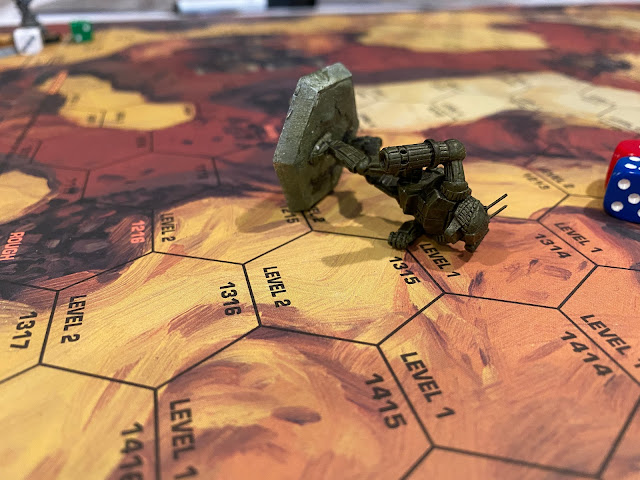 The Quickdraw waded into battle, unleashing a torrent of lasers at the mercenary Trebuchet. A lucky strike touched off the Trebuchet's LRM ammo, instigating a catastrophic explosion that destroyed the mech. Luckily the pilot was able to eject, but things were not looking good for the mercenaries. 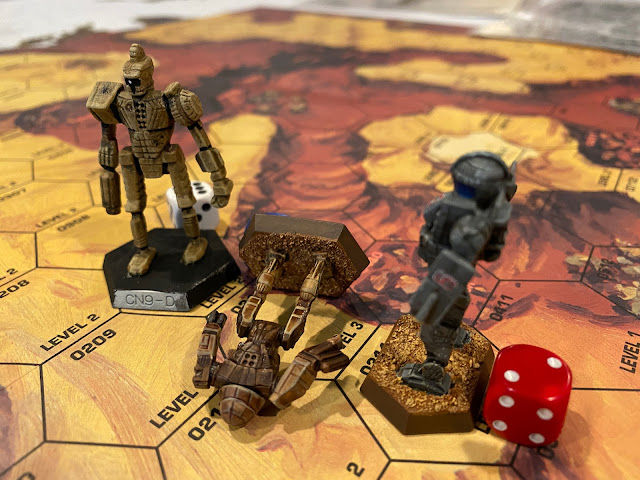 The bug mechs swarmed the recovery vehicle. Missing weapons, they needed to close to rake it with machine gun fire and deliver punishing physical attacks. With a final attack the recovery vehicle was disabled just before the mercenaries put down both Lyran scouts. 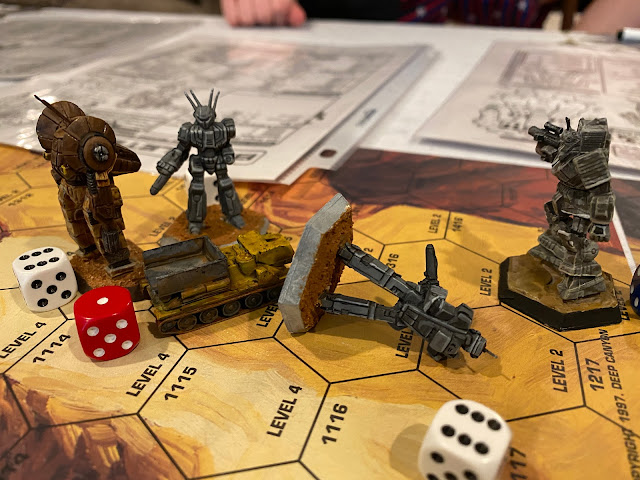 Having lost two mechs and suffered a number of critical hits the Lyran attackers were down to a morale of 2, while the mercenaries were holding steady at 12. Having achieved their goal, but with little hope of making up the morale deficit, the Lyrans withdrew from the battlefield.

While counted as a minor victory for the mercenaries for forcing the enemy to withdraw the loss of the Rifleman salvage and a Trebuchet stung. My son took it well, but as the mercs boarded their dropship for new pastures we both knew they'd need to build up their forces before launching into the next contract.

I played Battletech 20 years ago with my college buddies. We invariably played with big, beefy mechs. I was keen on Archers, Battlemasters, Zeus and Awesomes. Dialing things back to get my son up to speed and digging into the post apocalyptic feel of the 3025 era I'm putting a lot more light and medium mechs on the table.

Eyeballing this encounter I was sure those two scout mechs, the 20 ton Wasp and Stinger were going to go down in a single round when faced by a heavy mech and three mediums. I don't know if it was bad rolling (my son was plagued by awful rolls for the first half of the game) or I had underestimated them, but the bug mechs earned a lot of respect in both our eyes.

The combination of campaign, scenarios and morale rules is also a ton of fun which require an additional post to detail. My son is having a great time and spent yesterday afternoon agonizing over which crappy mechs to add to his growing mercenary forces for the upcoming mission to the ice world of Parakoila. Old Battletech is best Battletech!