My son's mercenary outfit fell on some hard times in the intervening years. They've held on to a few of the core of their mechwarriors, but will need to prove themselves before getting access to the juiciest contracts. Luckily they've caught a lucky break in getting the attention of a Draconic Combine official. 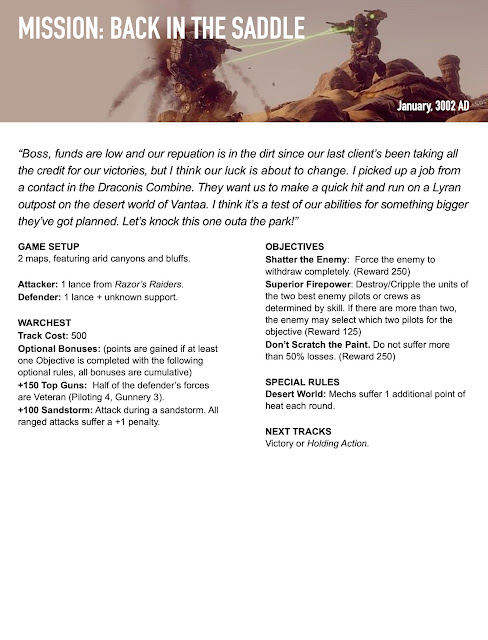 A pretty simple search and destroy mission with a few wrinkles for interest. I haven't played Battletech for years, so I wanted a scenario that was straightforward to ease back into the rules.

I skipped my morale rules for our last Battletech game, and the ensuing 7 hour long slugfest sapped my desire to run mechs for years. I brought my morale tracker back to make sure we finished the game in a reasonable time. 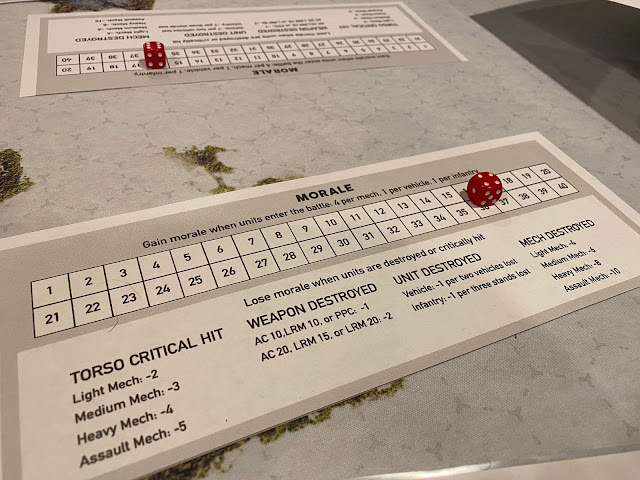 My son chose to launch his attack during a sandstorm, the heavy winds and blowing dust making ranged attacks more difficult. He entered the box canyon his forces were raiding to face my lance of defending Lyran mechs. 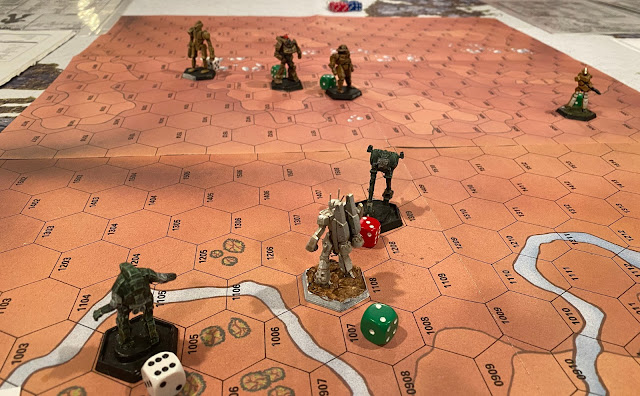 The one point sandstorm penalty didn't seem significant at first, but was just enough to negate any hope of making long range shots as the two forces closed. I sent the bulk of my forces along my left flank, while my Rifleman took a position waist-deep in a shallow river to mitigate the heat I knew its weapons would soon be generating. 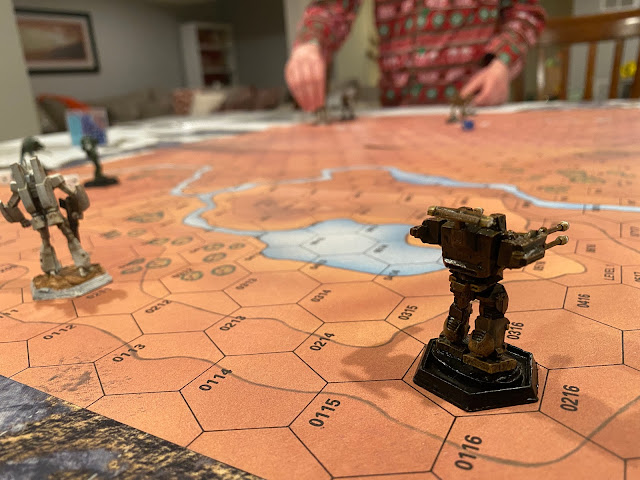 My left flank started tangling with the merc's main force: a Centurion and Griffin. My Rifleman laid down some support fire, but was still pretty far away. I moved it down the river to get into range, little heeding the threat posed by my the merc's light Javelin mech.

Using its jump jets it managed to get into an ace spot directly behind my Rifleman and unleashed a torrent of SRMs into its back. That's when I discovered mechs standing in shallow water use the punch location chart to determine hits. The SRMs tore through the heavier mech's rear armor, critical hits cascading through it, destroying a gyro and sending it crashing into the water. 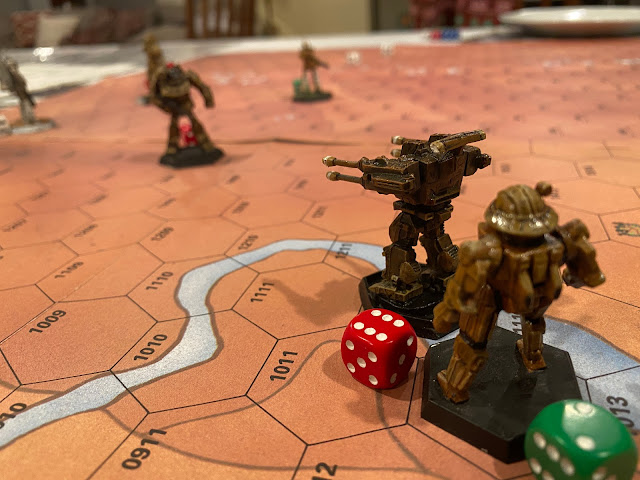 I still had some hope. Maybe I could stand up? Maybe I could reposition to protect my back long enough to get a few large laser shots off? That's when the merc  Griffin swooped in with the coup de gras: a single PPC shot blowing the Rifleman's head clean off! 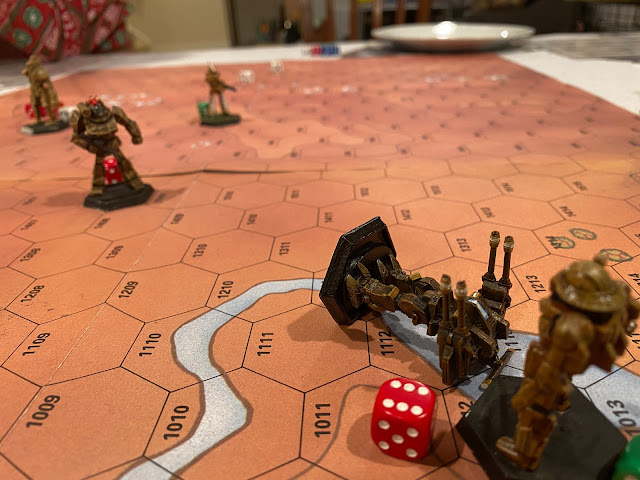 The destruction of the defender's heavy mech (including the critical torso hit it suffered) sent their morale plummeting. There was still a chance to pull out a victory but the loss of an ancient and terrifying machine like a Rifleman was enough to have the surviving mechwarriors question if the battle was winnable. Still they pressed on.

While the Rifleman had been maneuvering on the right flank, my Phoenix Hawk had been trading blows with the merc's heavier Centurion mech. Worried about getting charged, and hoping to get under the minimum range of its long range missiles, the Phoenix Hawk closed to point blank range.


Forced into an awkward position by a poor initiative roll the Phoenix Hawk withstood the blistering laser attacks of the Centurion who had climbed onto an outcrop just above it. With the shooting phase complete I began updating my heat and preparing for the next round.

"I can kick this Phoenix Guy right?"

That's when I learned another important lesson about Battletech. When a mech at an elevated level kicks another they use the increasingly worrying punch attack damage allocation chart. My son rolled to hit, connected and dealt 10 points of damage to the Phoenix Hawk's head, shearing it completely off.

The defender's morale collapsed at this point, the surviving Lyran mechs making a hasty retreat. The mercenaries (and their 11 year old commander) were over the moon at not one but two head shots in a single game. As for me, spending a few hours laughing and rolling dice were the perfect antidote to the stress of our current situation. I can't wait to play again!
Posted by John at 11:36 AM