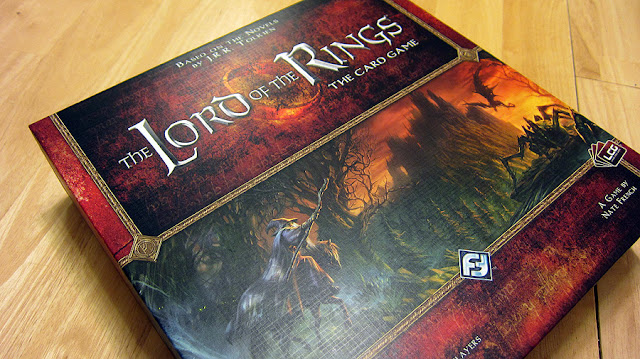 With my wife's work schedule clearing up now that school's wrapping up for Summer, I thought we'd have time for a week-night two player game, but I didn't want to deal with the time investment of a true wargame. I picked up Fantasy Flight's Lord Of The Rings: The Card Game

after reading a bunch of good reviews and watching the demo on "Watch it Played". We've played a few games, and I've really enjoyed it.

It's fairly complex initially, and seeing the explanation on Watch it Played was a huge help. Briefly, each player starts with a deck of cards representing three heroes from the Lord of the Rings saga, as well as allies, events and equipment to help them in their adventures. Players can customize their decks using the cards in the initial box set, as well as expansions that area released monthly.


Before play, the players pick a scenario and construct an adversary deck with unique creatures, events, locations and goals. During play, the adversary deck will generate an ever growing threat of creatures, nefarious locations and the treachery of the Enemy. The players need to balance a number of potential actions between reducing the growing threat of the Enemy, questing to complete scenario objectives, and attacking and defending against monsters who have grown bold enough to actually engage the heroes in combat.

There never seems to be enough resources to handle everything, and you can never do quite as much as you'd like each round. This game is tough, but in a good way. Players have challenging decisions to make, and the end game can be a real nail biter.  There's also enough "narrative backbone" to envision what could be going on during play, instead of all the cards and effects being completely abstract.

We jumped on the LotR LCG train fairly late, and I have no idea how many expansions we'll pick up, but for now we're really enjoying it.