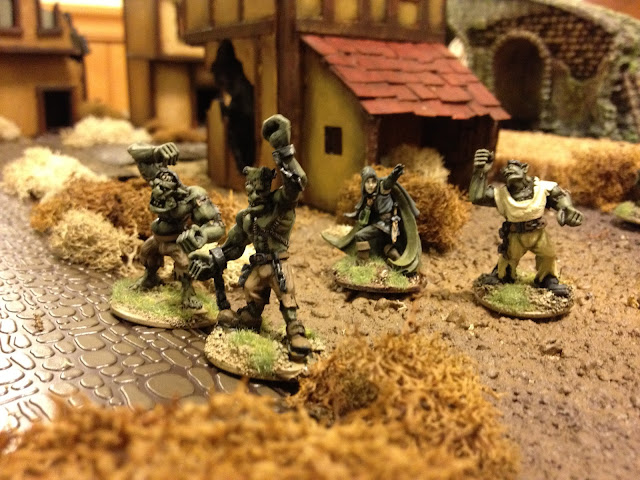 Setting up the Halloween Skirmish


Other than a few brief solo plays or test runs with my son, this was my entire group's first trial of "Song of Blades and Heroes", a fast play set of skirmish rules for fantasy gaming. Each model has only two stats: quality (a score they need to roll on a d6 to do anything) and combat (a score that is added to their single combat roll). Figures are modified by special abilities that let them alter the rules, but keep the overall rules overhead to a manageable limit.

I put together five different warbands and let our group pick their favorite. Each warband deployed within a "long" distance of a table edge closest to the player's beer. 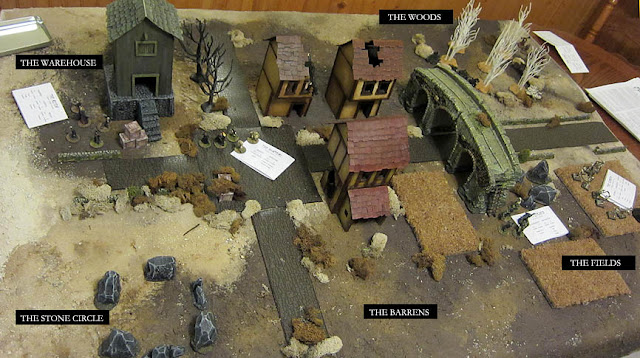 Bob's "Risen" (a vampire, four ghouls and four wolves) skulked near the Warehouse. Mike's "Cult" evil priest and two human archers summoned three demons (using smilodon warrior stats) in the Demon Circle. The Other Mike took a bullet for the team, setting up his "Hunters" (two clerics and three undead hunters) in The Woods, and helping his 6 year old son set up his "Cursed" (a mummy, 8 skeletons and a giant scarab beetle) skitter forth from the fields. I set up my "Stitched" warband (an alchemist magic user and four golems) in the Barrens.


I pulled stats from the rules when possible, but used the online warband builder to create a few custom creatures. After the game we realized there are a few more restrictions regarding warband construction regarding leaders and tough models, but everything seemed to work out ok for this initial play.

A Song of Blood and Horror 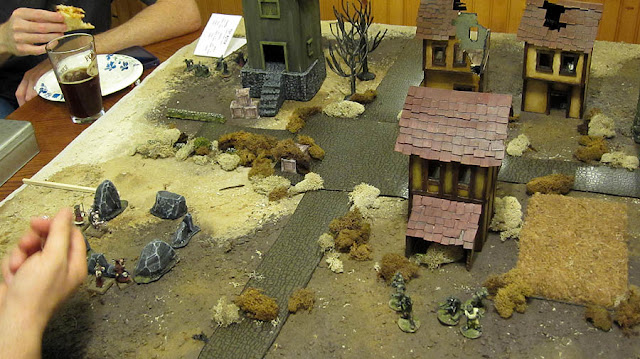 The initial moves saw the Hunters head towards the road to open long range fire on the Cursed skeletal minions of the mummy, who shambled out of the weedy fields towards the town. The Cult, caught between the vampires and monstrous Stitched, took up a defensive position within the Demon Circle. 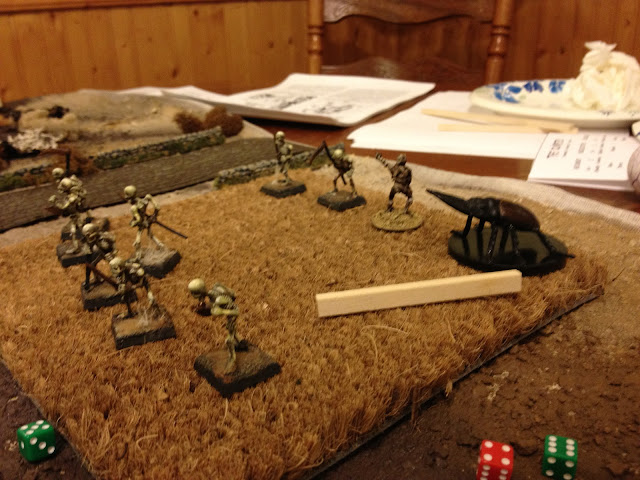 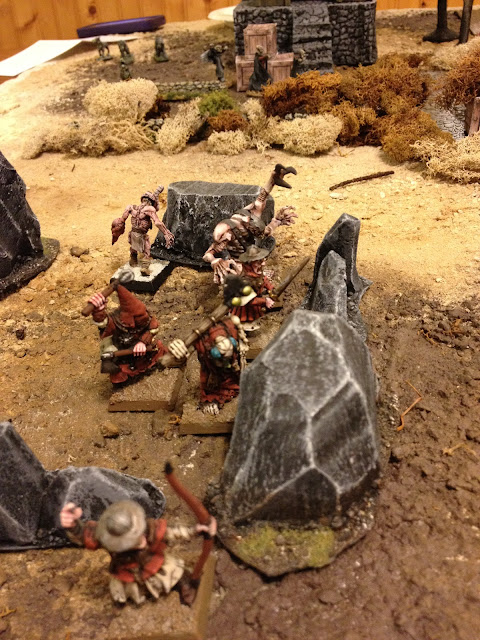 The dapper vampire commanding the Risen sent his ghoulish minions forth to battle the Cult, but was unable to whip his wolves into a battle frenzy. By only using a single die to activate each wolf, they failed to move more often then not and spent most of the game lagging behind. One poor pooch spent the entire game in his starting spot (chasing his tail no doubt). 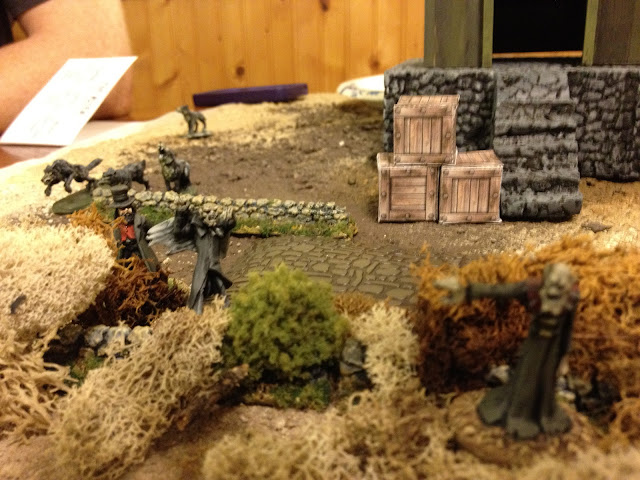 Having played Mike countless times, I knew he'd need to be double teamed and destroyed before turning my attentions to lesser threats. I sent three of my Stitched golems and their alchemist leader towards Mike's cultists. He shifted his forces in response, ready to drive off attacks from two fronts. 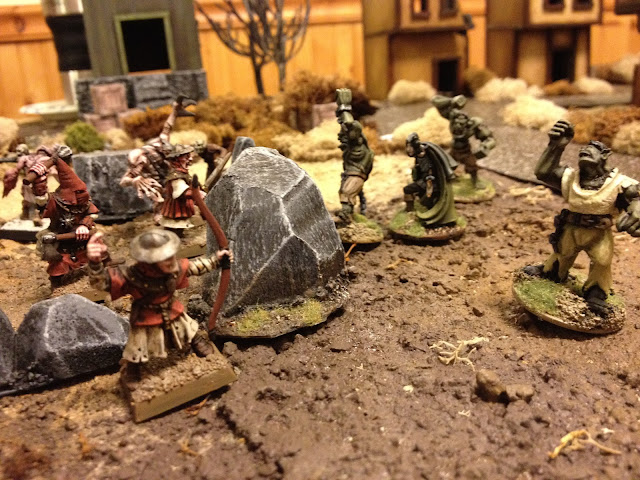 On the other end of the table, the Hunters methodically whittled down the Cursed skeletons. All five Hunters were lethal against undead and made short work of the rattling bones. Emboldened by their success they raced across the road to take the mummy and giant scarab on in melee. 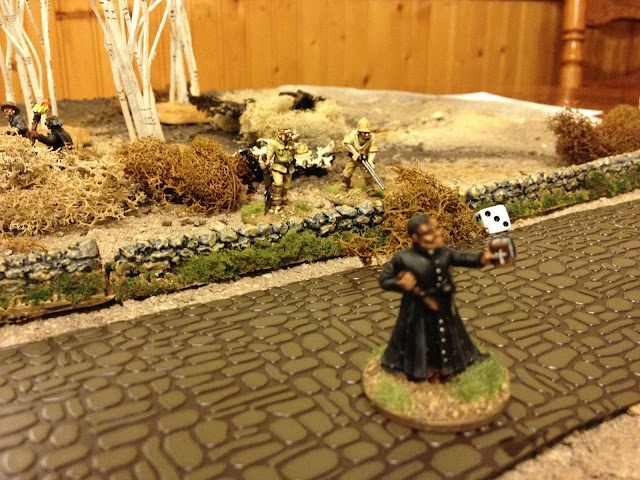 The skeletons for their part noticed a ladder leaning against the side of the large gate ruins on the outskirts of the town. 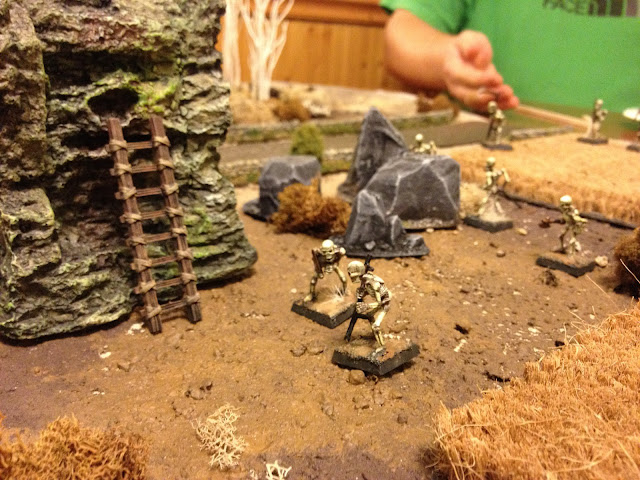 They spent the rest of the game climbing to the top of the gate.  There was quite a breathtaking view up there! Tactically, that may not have been the best choice. 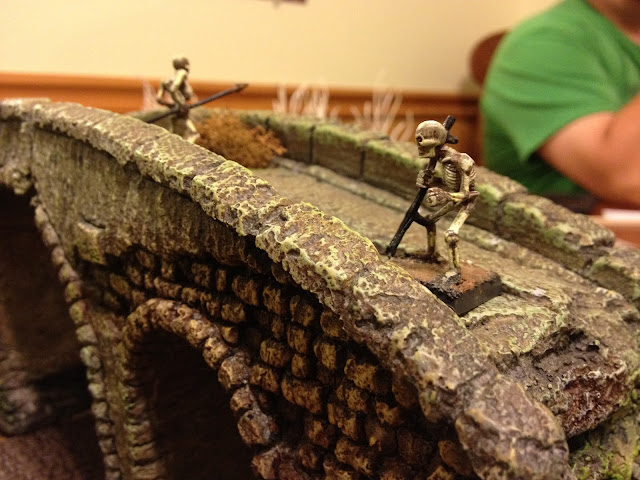 Meanwhile, the Cult was managing to fend off the initial rush of ghouls, but things were looking dire for them. The main assault of the monstrous golems began. Distracted by the brutes, the Cult barely noticed the dapper fellow in the top hat nonchalantly rounding a boulder with an open path to their flank. 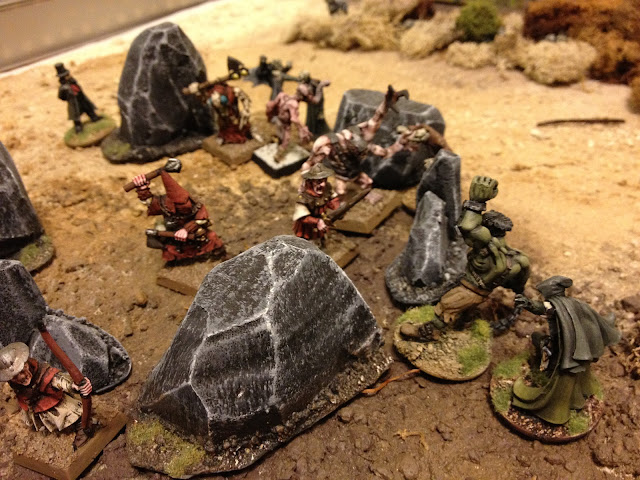 With the narrow entrances to the circle, the Cult managed not only to hold off the monsters but force a morale check by ripping one of them to shreds. The entire band was close to the table edge and when their leader fled from battle the remaining golems were forced to make checks seeing only one remain on the table at the end of the round.


All was not lost though. The European gentleman turned out to be the Risen's vampire, and went into melee with the five remaining cultists. The undead bloodsucker held his own for several rounds before finally succumbing to the onslaught. When the vampire was slain, his wolves retreated into the wilderness.

The Hunters finished off the mummy but discovered a new threat. With my last golem bearing down on them, the Hunters took a page from the Cultist hand book and found a defensive position in some standing stones. 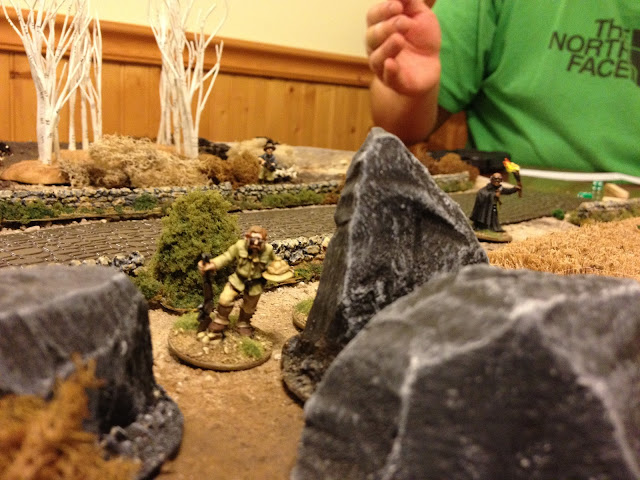 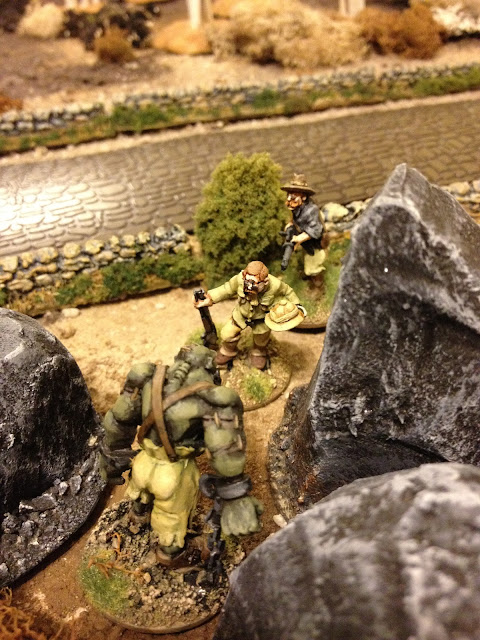 The Cultists raced across the field to finish off their last remaining foes. With time running short though the Hunters were forced to concede the field. 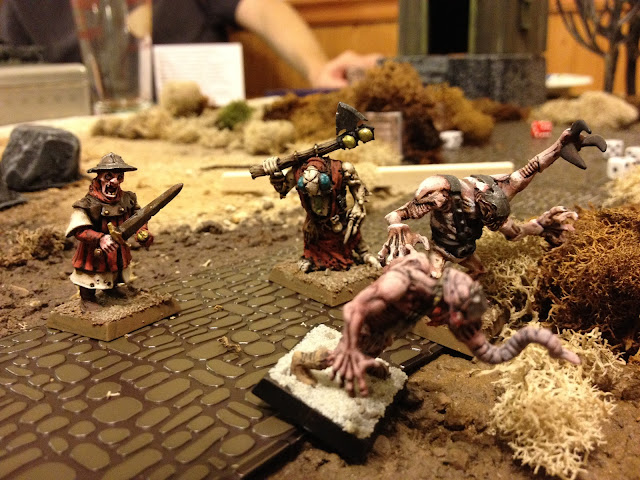 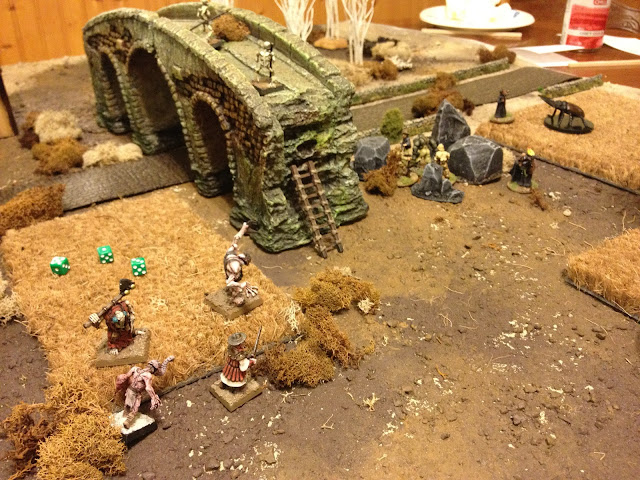 Quick Review of Song of Blades and Heroes

I really enjoyed Song of Blades and Heroes.  It was fast, each figure type had enough unique characteristics to make it interesting, and while this was our first time playing there was very little rules referencing. When the game was over I wanted to jump back in and play again, but wives were a-callin' and we needed to wrap up. Overall the rest of the group had positive comments and were up for future games. We had five independent teams, all of us were new to the rules, and we were coaching a child through the game and we wrapped up within 2 hours. That bodes well for future plays.

I'm sure we screwed some things up, but I'm hoping the latest edition of the rules clarifies some of our questions. I'd really like to play a long term campaign with Song of Blades and Heroes, but life is pretty rough at the moment and I'll have to console myself with the odd game here and there. Still, I'll likely pick up a few of the expansions in hopes of rolling SoBaH out once the Reaper mini extravaganza arrives in the Spring.