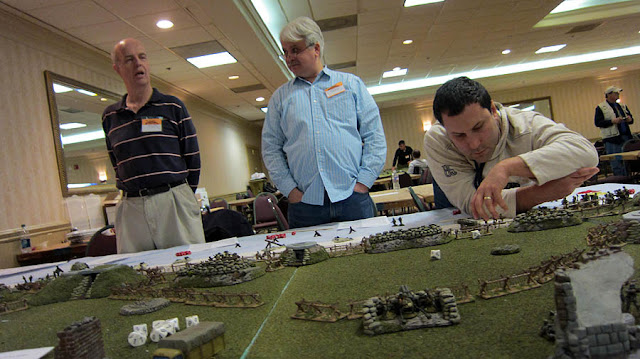 Our Fall-In 2012 adventures continue with lot of World War II action and a return to Lord of the Rings. Pics and comments after the jump.


Our first game of the day was Atlantic Wall, which saw U.S. forces making their D-Day landing against the entrenched German defenders. 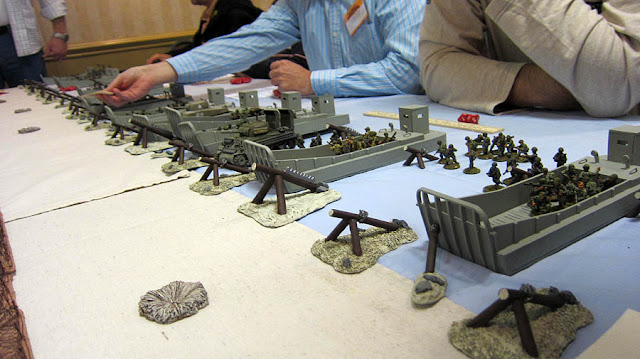 The simplified rules based on "Disposable Heroes" were modified to allow players to "move soldiers and roll lots of dice, because that's what people at cons want to do." according to game master Greg Whitaker. 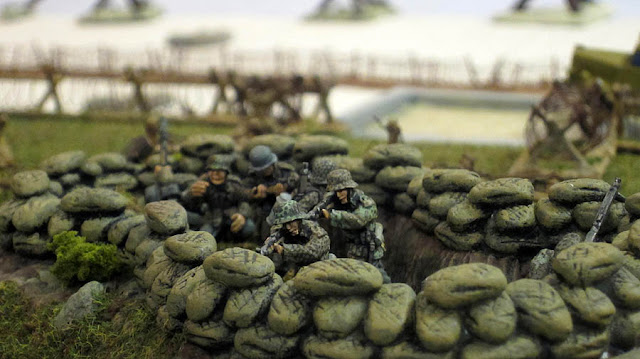 The initial wave met fierce resistance but managed to severely weaken the German right. An on table transport truck managed to get off the table and return with reinforcements to plug the holes in the German line.

The second wave of Americans hit the beach though, and with the thin defense facing them on their left were able to mount a heavy offensive against the Germans. 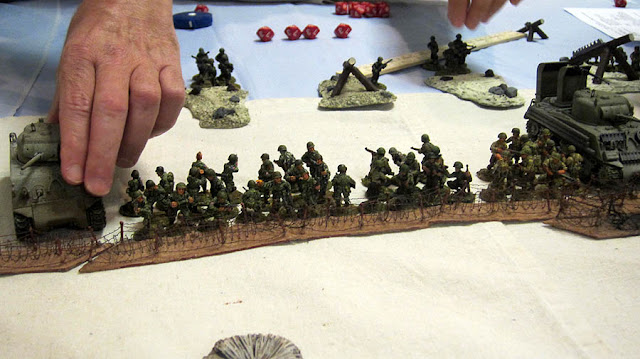 While the Germans failed to hold off the invaders, I still had a good time. The rules were indeed simple and allowed us to roll lots of dice. There was enough "chrome" to make it feel like the opening from Saving Private Ryan, with sinking landing craft, drowning soldiers, multiple waves of attackers, and nuances to fighting near the sea wall. But I think beach landings are pretty static affairs, with defenders sitting in their bunkers, and waves of invaders getting slaughtered just hoping to claw their way onto land. Feints, maneuvers, and other complex strategies don't seem to appear in such straight forward fights.

Our second game of the day was Fireball Forward, with a Japanese armored assault attempting to bypass U.S. Marines trying to stop the enemy tanks from reaching Henderson Field off the east board edge. 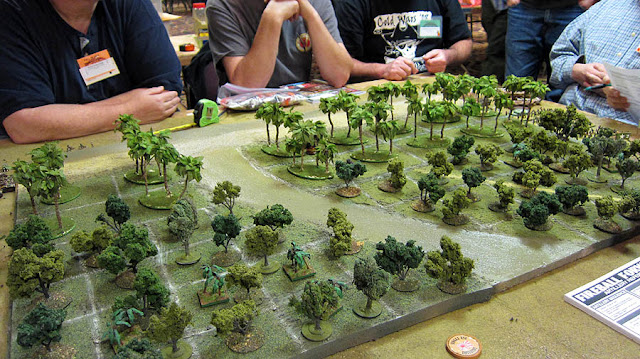 The battle erupted along the river bank near the sand bar and ocean, seeing banzai charges sending the Marines reeling, only to suffer American artillery which zeroed in on the Japanese positions. 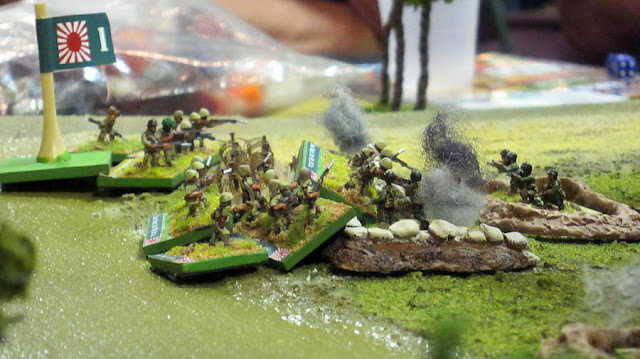 After a tough fight, the Japanese managed to race three of their tanks past the American flank and off the far table edge in victory. BANZAIII!
This is the third game of Fireball Forward I've played and it's reinforced my high opinion of the game. The card mechanic is unique, interesting and fun, and I really like the variable range on weapons, which might seem clunky, but plays elegantly. Looking forward to running a game at home as soon as my opponent gets his Germans finished.

I spent some more time taking pics of nearby games. A Pacific landing game nearby looked great, nabbing an award for "Best in Timeslot" 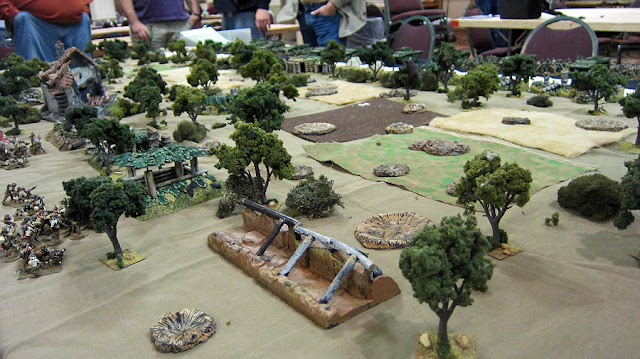 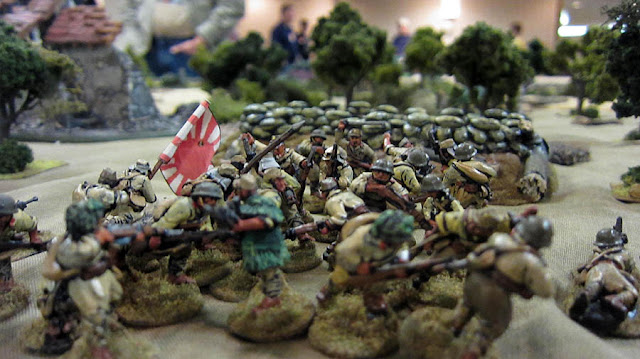 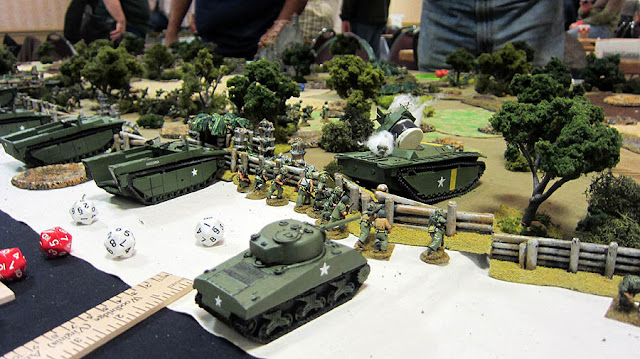 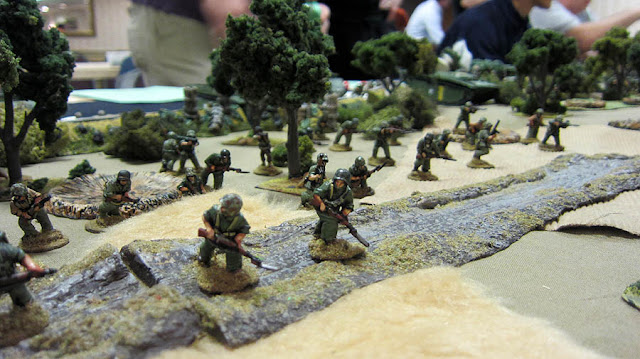 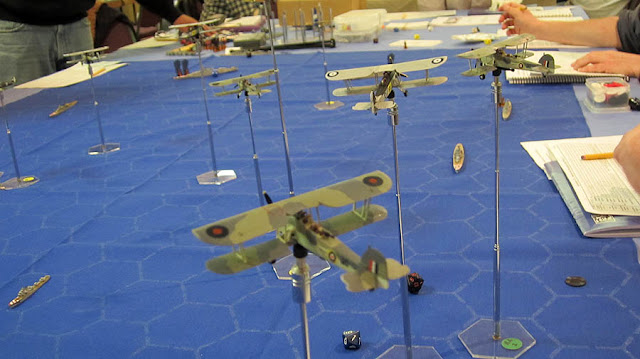 Sunday saw the con wrapping up, but we did manage to get in another Lord of the Rings game concerning a hypothetical attack on Bree. Great looking terrain, but my orcs and troll got distracted beating up the town watch and failed to come even close to accomplishing their objective. 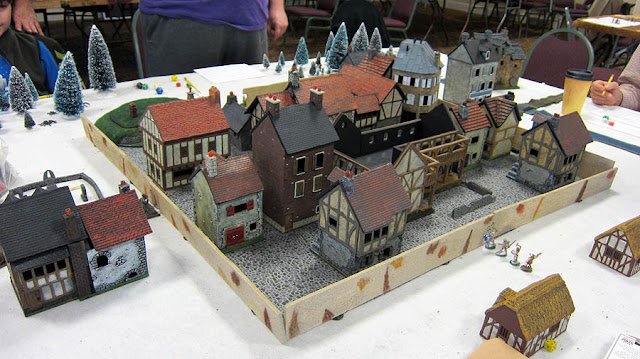